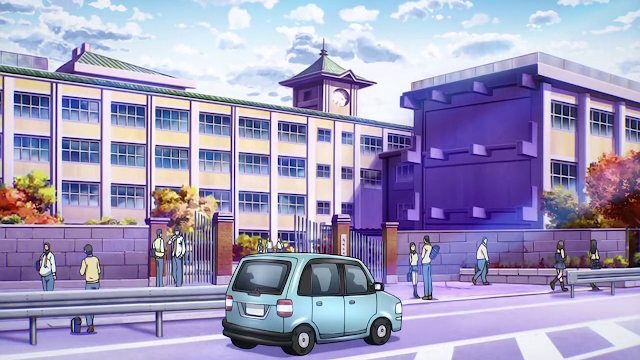 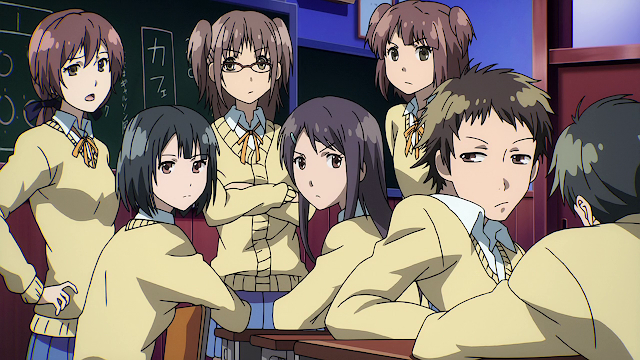 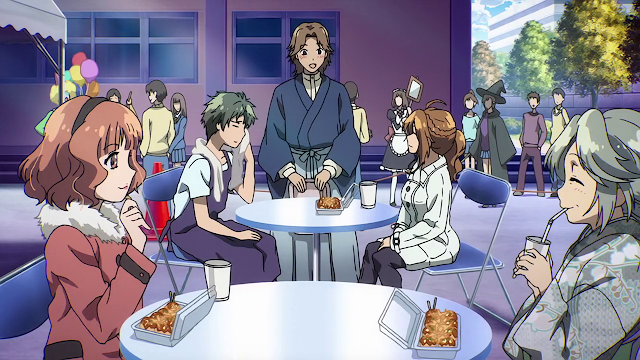 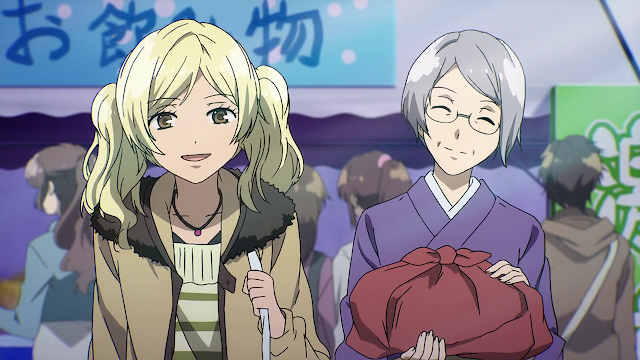 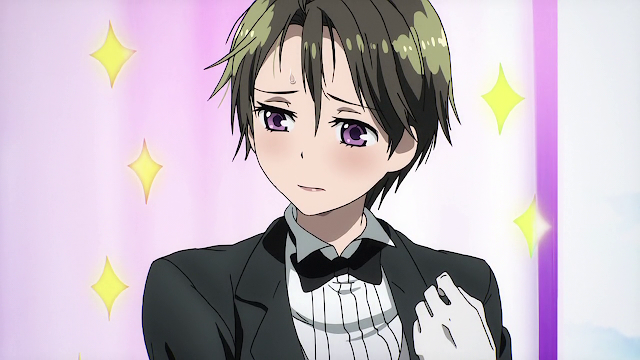 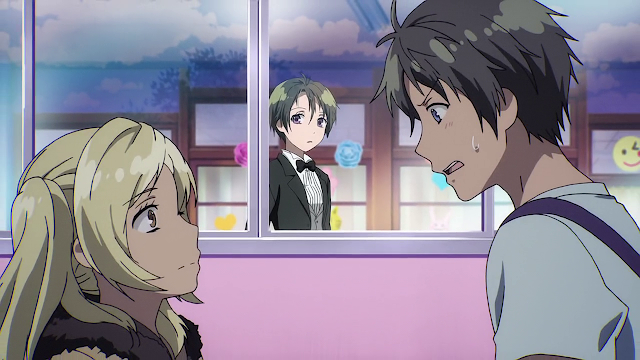 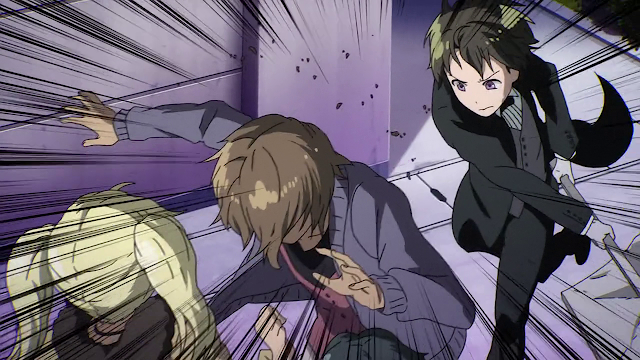 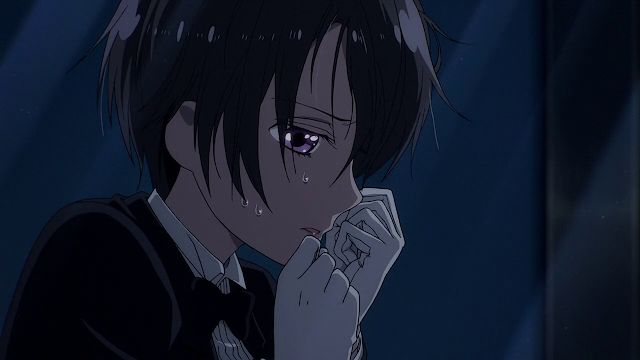 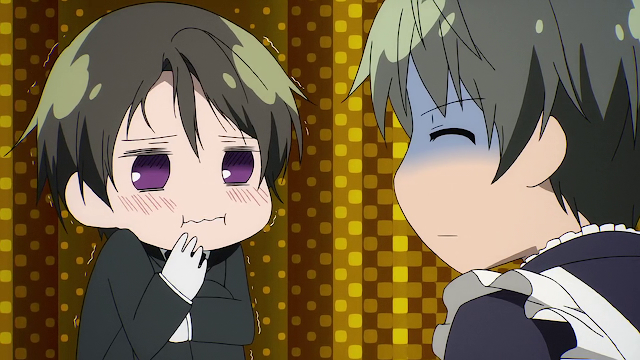 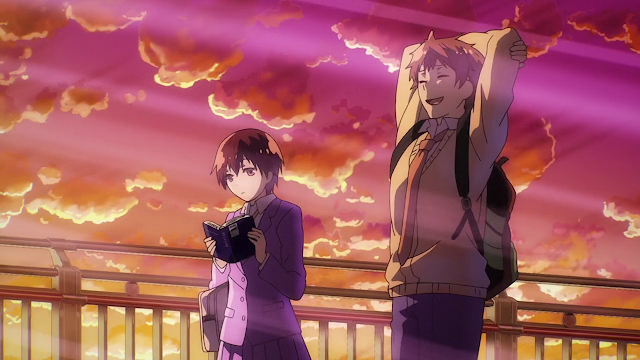 2 Comments Posted by infinitezenith on December 18, 2014

The fall season is just a few weeks from closing off, and this is probably the closest I’ve cut things as far as doing season previews are concerned. Thanks in no small part to a busy schedule and the influx of anime to watch and discuss, I’ve put off doing a preview for quite some time now, but today, I’m mostly done everything for this term, so there’s been a little bit of time to step back and see what’s happening in the Winter 2015 anime season. Owing to a shift in my logistics for this year’s winter holidays, I’ll be doing final talks for Sora no Method, Sword Art Online II and Amagi Brilliant Park after the new year kicks off. Similar to last winter, there are a handful of shows I’ll be following, and below is a mostly-complete listing of the Winter 2015 offerings.

A cursory glance at the chart shows that Kantai Collection, Saenai Heroine no Sodatekata and Aldnoah.Zero‘s second season have my eye. I’ve been hearing about Kantai Collection since last September, and have been looking forwards to a naval version of Strike Witches and Girls und Panzer. The game itself is wildly popular, but I’ve never really understood the appeal beyond “anthropomorphic battleships of the Imperial Japanese Navy” (I’ve always been more of a fan of the US Navy). The anime, on the other hand, looks to be something that’s meant to be enjoyed, and while discussions elsewhere turn to the technical, I’ll try to focus on enjoying the show for its character dynamics and combat choreography. Saenai Heroine no Sodatekata (How to Train the Ordinary Girl to be a Heroine) looks to be an anime about building a visual novel. I understand that Aldnoah.Zero‘s first season ended on a disappointing note, but out of my own curiosity to finish it, I’ll take this one up as the Winter season’s “serious anime”. Because the premise is already known, there’s no real need to give it its own section, and I’m personally hoping that how they reintroduce things will at least make some sense without depending on something outrageous. Beyond the shows, there’s also the Bokura Wa Minna Kawaisou and Tari Tari OVAs; the former will release later this month and be reviewed somewhere in the new year (hopefully, before mid-January has passed), latter should have released yesterday, and I’m hoping that the BD will feature a HD version of it, because Tari Tari is something that was meant to be watched in 1080p, rather than 480p.

The story is set in a world where humanity has lost control of the seas to the threat known only as the “deep sea fleet”. The only ones who can counter the “deep sea fleet” are the Kan-musume (warship girls), who possess the spirit of naval vessels harking back to an older era. Stationed at the naval base Chinjufu, many various Kan-musume have gathered to live together, working hard everyday in training and improving other aspects of their daily life. One day, a Kan-musume arrives at Chinjufu. Named Fubuki, she is a special class of destroyer, and her arrival sets in motion the story that will be told in Kantai Collection.

Tomoya Aki is an otaku who works part-time to earn money to buy anime. One day during spring vacation, he meets a beautiful girl, and not more than a month later, he finds out that the girl is his classmate, Megumi. Tomoya is told that she is hardly noticed by the other classmates. Tomoya, who also has no special skills or abilities, decides to write a visual novel. Enlisting Eriri Spencer Sawamura, a well-known member of the Art Club to provide the art for the game and Utaha Kasumigoaka to write the game scenario, Tomoya kicks off Blessing Software, whose goal is to sell their game at the next Comiket.

“I could be myself. I’m very shy and awkward. I think the best thing is to embrace it.” —Hunter Hayes

Bokura wa Minna Kawaisou (The Kawai Complex Guide to Manors and Hostel Behavior) is an offering from the Spring 2014 season: when this anime’s original run ended, I was working on transitioning between different scenes for the Giant Walkthrough Brain in Unity3D; at the time, I was working with the Unity free license, rather than Unity Pro, so some features, such as camera blur, had not been implemented yet. I was also catching up on Gochuumon wa Usagi Desu ka? during this time, and so, didn’t really consider watching Bokura wa Minna Kawaisou, at least until one of our readers made the recommendation. The anime’s premise seems familiar enough: Usa is a high school freshman who moves to live in a dormitory (in this case, the Kawai Complex) and falls in love with one of the residents, Ritsu Kawai. Initially, Usa is unaccustomed to the whacky life there, and over time, he gradually adapts, all the while doing his utmost to impress Ritsu and win her heart. Throughout Bokura wa Minna Kawaisou, Usa demonstrates the lengths to which he is willing to go once he’s committed to something; this leads to much of the comedy in Bokura wa Minna Kawaisou, as well as the more touching moments between Ritsu and Usa. With its over-the-top cast, including Mayumi, Sayaka, Shiro and Sumiko, the dynamics between everyone means that there are no dull moments at the Kawai complex (typically, Shiro tends to find means of breaking the calm), and correspondingly, there are no dull moments in Bokura wa Minna Kawaisou. 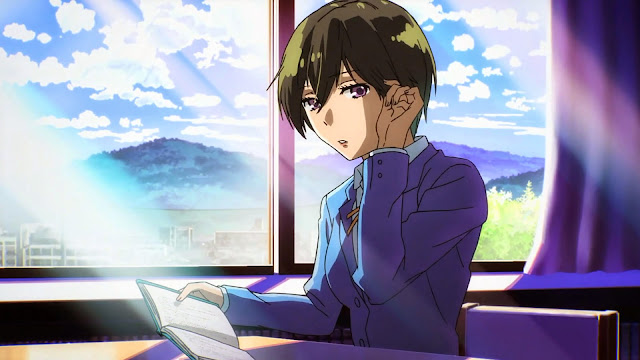 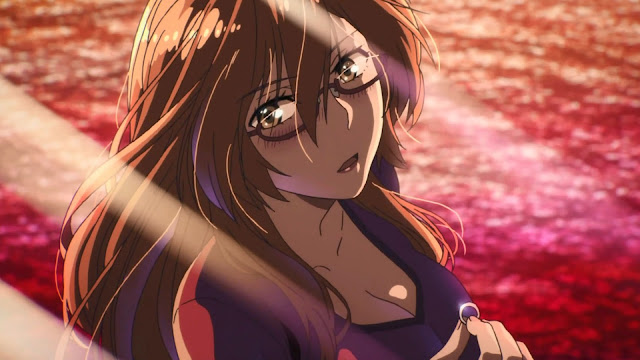 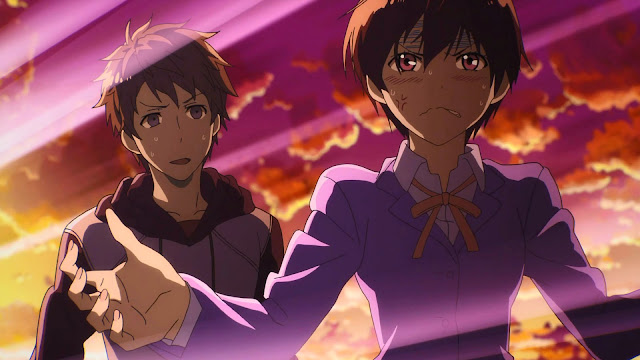 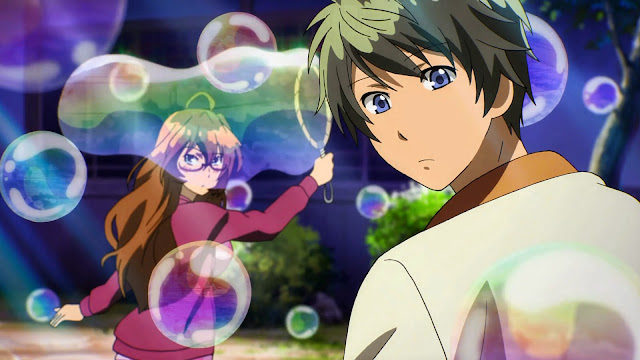 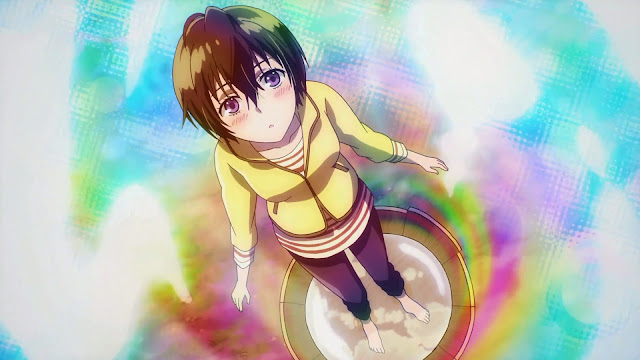 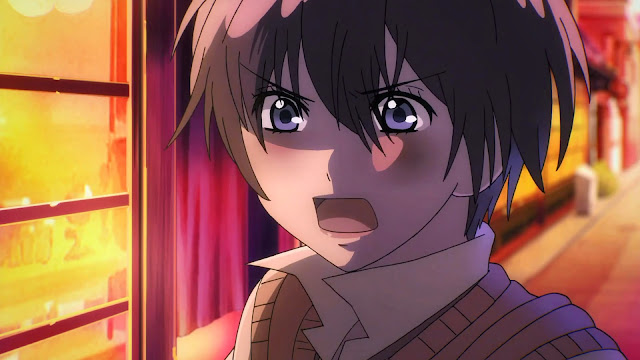 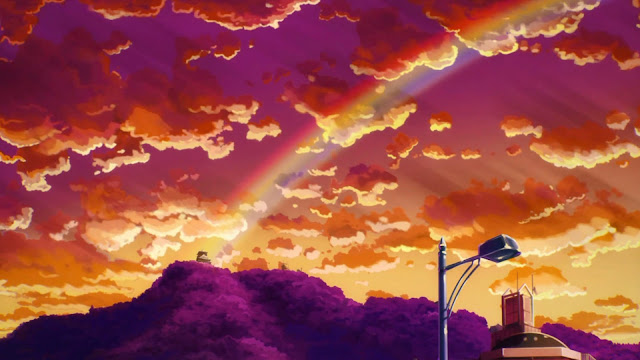 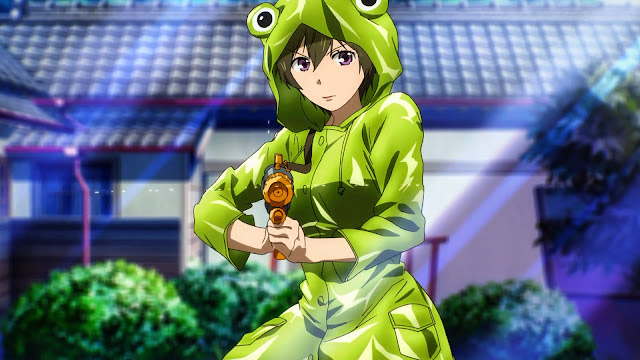 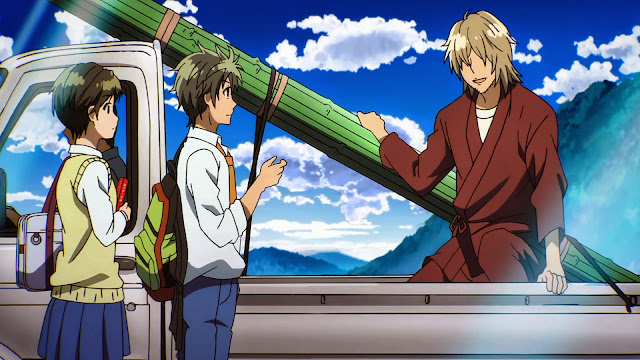 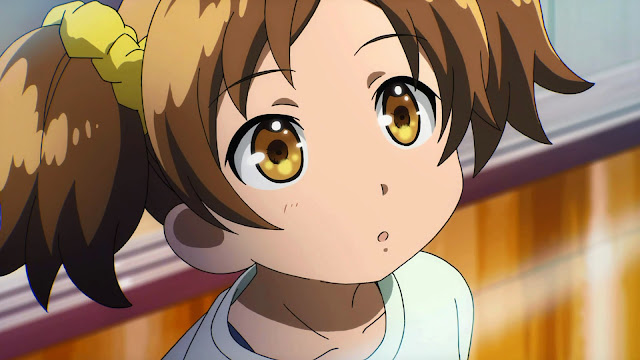 The visual elements in Bokura wa Minna Kawaisou is going to form the main body of this talk, since the recommendation was made on the basis that Bokura wa Minna Kawaisou would be similar to Five Centimetres per Second. This is a particularly bold claim, and from a personal perspective, this does not really hold true. Bokura wa Minna Kawaisou does have a vivid colour palette, and places emphasis on lighting in numerous scenes; light shafts are frequently seen in landscape shots, and particularly touching moments are usually set under a sky of most azure or a sunset. These details contribute substantially to the anime’s atmospherics, but the colours chosen seem to be intended to allow different elements within the scenery and the characters to stand out from one another. This is done to emphasise that while the landscape can be filled with great beauty, it continues about its business regardless of what the characters are up to. Similarly, the cast is often focused on their own matters, so they tend not to notice just how spectacular things in their world is. This disconnect is particularly noticeable in Ritsu, whose surroundings fade to oblivion whenever she’s engrossed by a good book. In choosing to go with this sort of art style, Bokura wa Minna Kawaisou subtly hints that as people go about their lives, the things around them may be (unintentionally) ignored, and quite similarly, Ritsu is not fully aware that Usa has a crush of sorts on her. Thus, when the characters are relatively oblivious to things in their environment by default, Bokura wa Minna Kawaisou is able to focus on how Usa and Ritsu’s friendship helps them become more aware of the things around them. 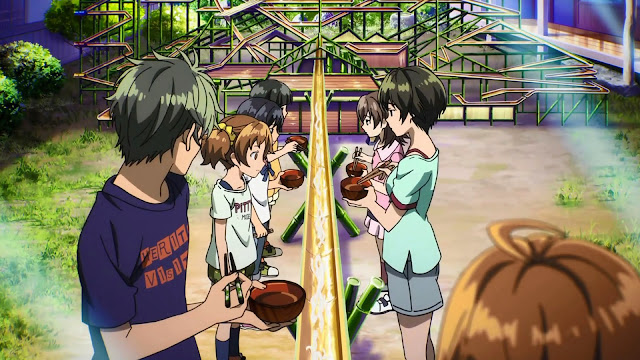 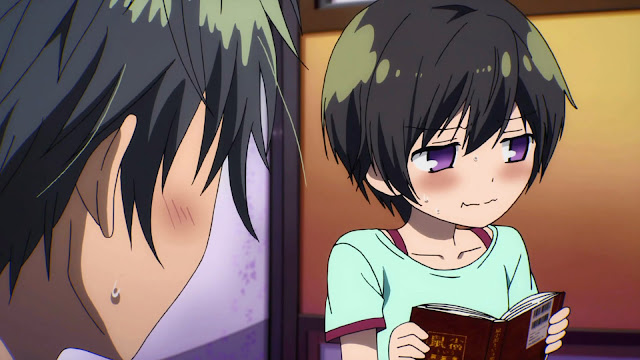 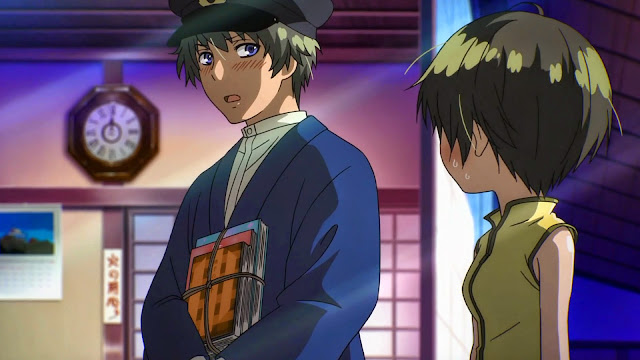 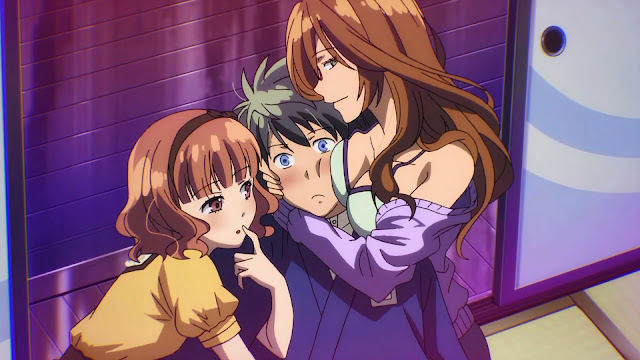 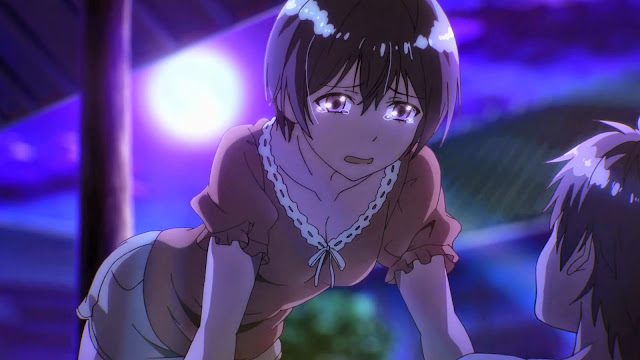 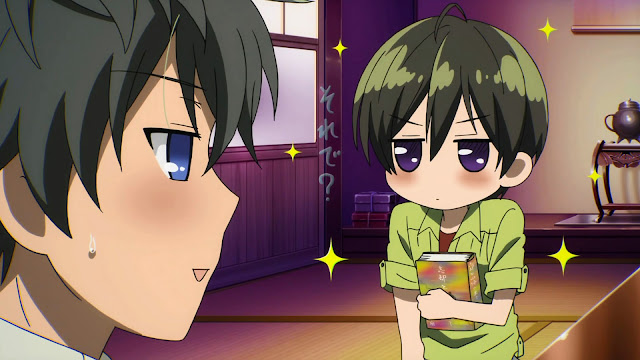 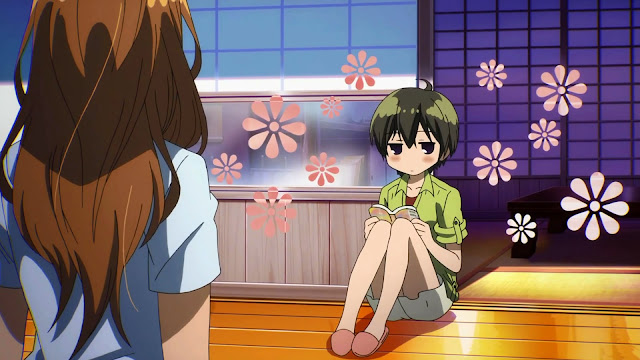 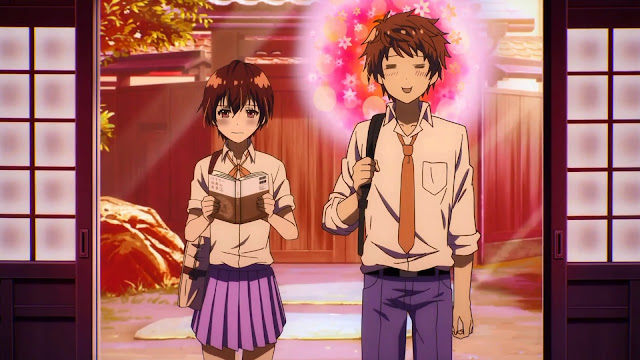 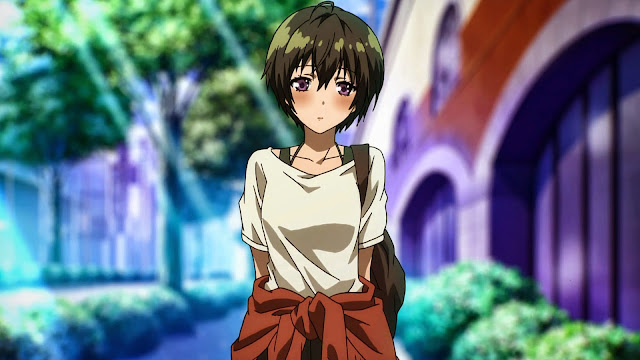 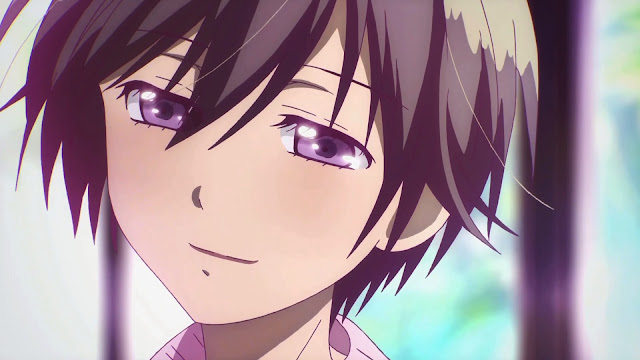 By comparison, in Five Centimetres per Second, Makoto Shinkai chooses colours that are more similar in hue to one another. By making use of shading and gradients, these colours allow elements in the environment to blend in seamlessly with one another to give the impression that the characters are very much a part of and aware of their surroundings. Besides the art style, and its general focus on comedy (especially where Shiro, Mayumi and Sayaka are concerned), some more serious details are considered (including stalking, harassment and bullying): romances hardly ever proceed smoothly as they do in most anime, and Bokura wa Minna Kawaisou is one of the few anime I’ve seen to show the impulses and incidents associated with romances: even if Usa and Ritsu do hold feelings for one another, various hang-ups, whether it be Usa’s clingy tendencies or Ritsu’s propensity to bottle things up and nail others with the truth after being pressured, as well as Mayumi and Sayaka’s meddling, seem to play a substantial role in slowing things down. This is something I am quite familiar with (albeit at a smaller scale), and represents a refreshing take on the whole notion of romance in anime. Despite a solid showing, entertaining situations and well-balanced characters, Bokura wa Minna Kawaisou is probably not suitable for all audiences; some humour is particularly risqué (especially where Mayumi is concerned), and those looking for a conclusive love story won’t find one here. From a personal perspective, these were relatively minor faults, and as such, individuals looking for a different type of coming-of-age story would find an enjoyable one in Bokura wa Minna Kawaisou.