Broken Blade: A Review and Reflection

“The enemy? His sense of duty was no less than yours, I deem. You wonder what his name is, where he comes from, and if he really was evil at heart. What lies or threats led him on this long march from home, or he would not rather have stayed there…in peace? War will make corpses of us all.” –Faramir, Lord of The Rings: The Two Towers

In a world where humans are born with the innate ability to manipulate quartz, Rygart Arrow is an un-sorcerer incapable of this power. He works on the family farm until the threat of warfare prompts King Hodr and Sigyn to invite Rygart to Binoten, Krishna’s capital. Here, Rygart learns that the neighbouring Kingdom of Athens intends to invade Krishna for their quartz reserves and intend to execute the royal family, including Sigyn. Their former friend, Zess, is part of an advance force to scout of Binoten’s defenses. Hodr also shows Rygart a mysterious Golem from an ancient era, and when Rygart demonstrates the ability to operate it, he becomes the Golem’s acting pilot. The horrors of warfare prompt him to leave, but General Baldr convinces Rygart to take responsibility for his actions. Rygart decides to stay, and continues piloting the Delphine into combat despite his lack of experience. The Delphine’s performance prompts Athens to send General Borcuse out: Borcuse is a talented strategist known for his brutality, and despite being under house arrest, Athens believes his methods will the most suitable for swiftly ending the war. As the outlook worsens for Krishna, they assign Girge (Baldr’s son) to Rygart’s squad, and Rygart continues training to familiarise himself with the Delphine. Meanwhile, General Borcuse has reached the Krishna border and single-handedly destroys much of the Krishna forces there, including General True. Baldr manages to rally his forces, and with Rygart’s help, forces Borcuse to retreat. Rygart later returns to his village against orders and finds that General Borcuse had slaughtered the inhabitants slaughtered. He engages Borcuse and is defeated: Borcuse believes that the Delphine’s exceptional engineering is behind its combat record, and orders it taken back to Athens, but is forced to retreat again when Krishna’s forces arrive. Borcuse’s subordinates, Io and Nike decide to strike, but Girge intervenes. He manages to defeat Bike, and sacrifices himself to save Rygart. His pride wounded, Borcuse decides to press an attack on Binoten, and although his forces manage to overwhelm the capital’s defenses, Borcuse himself is killed in a final confrontation with Rygart, whose Delphine is equipped with a crude but effective weapon. In the aftermath, Athens begins to withdraw, and Rygart learns that his younger brother is alive. Originally a manga that began running in 2006, Broken Blade was adapted into a six-part film in 2010-2011: the movies are is considered to be a faithful adaptation of the manga with the exception of the finale, which was re-written in a way as to offer more closure, whereas the manga is ongoing.

Broken Blade resembles Gundam Unicorn greatly: both series feature a reluctant pilot who gradually comes to take responsibility for entering the cockpit of an uncommonly powerful mecha. In Break Blade, Rygart finds himself pushed into war when Krishna, outmatched by the Golems Athens fields, is forced to fight for its survival. With its superior engineering and unique OS, the Delphine is a piece of hardware from an earlier time that far surpasses contemporary mecha, only responding to Rygart because he is an un-sorcerer. Because of this, Rygart’s inability to manipulate quartz suddenly renders him in a position to make a meaningful contribution towards saving Krishna and Sigyn. In spite of the horrors of war, such as witnessing an enemy pilot commit suicide rather than be captured and learning that General Baldr’s own son cracked under train and killed blue forces during an exercise, Rygart’s conviction is shaken. However, seeing first-hand the lives that stand to be saved and hearing Baldr’s wisdom ultimately convinces Rygart to rise to the occasion, and while Rygart never improves substantially as a pilot, his unorthodox methods result in the death of Borcuse, a key player in Athens’ military. The anime movies show that by choosing the more difficult route, which entails personal sacrifice, witnessing atrocity and and the loss of innocence, Rygart was able to spare Krishna of a bloodier war and the death of the royal family. Broken Blade thus shows that sacrifices made in the present are not always in vain; when Rygart accepts responsibility for his role in the conflict and steps into battle, he sees first-hand the horror and desolation of war, driving him to act in a way so as to reduce future bloodshed. Further to this, Rygart lacks any real understandings surrounding the complexities of warfare; his motivations for fighting stem from simply protecting his friends from the conflict. As such, while Rygart comes across as immature and inexperienced, his insights demonstrates how a naïve mind can underline the futility and pointlessness behind why wars are fought. Gundam Unicorn‘s themes, while considerably more broad and expansive, covered similar territory: Banagher similarly chooses to act as the Unicorn’s pilot and play his part in stopping Full Frontal from potentially creating a worse status quo for the Universal Century even if it means getting blood on his hands from the conflict. 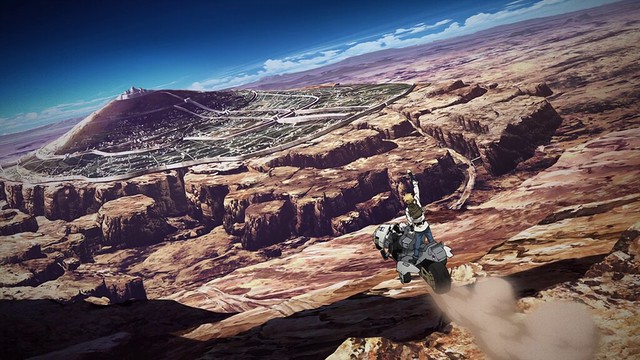 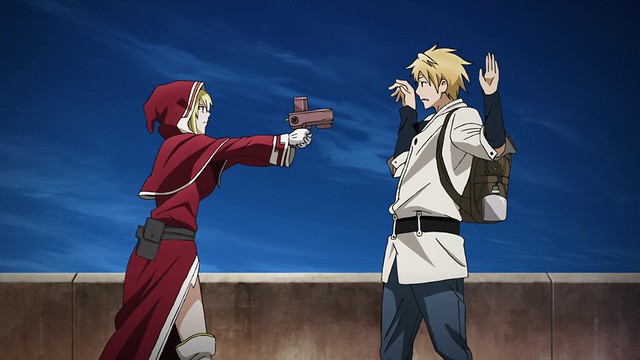 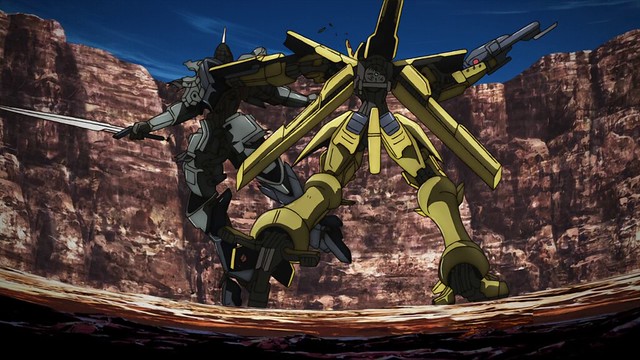 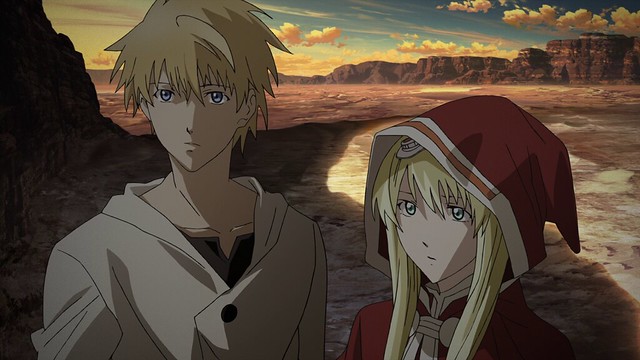 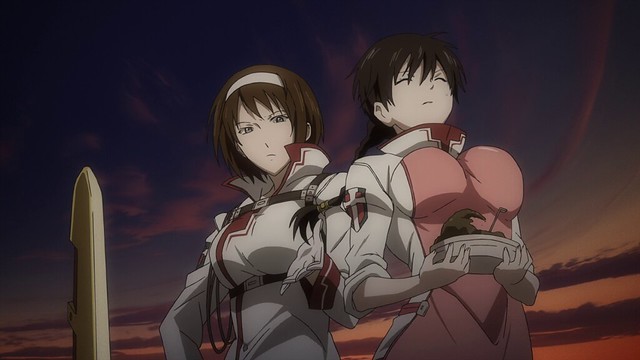 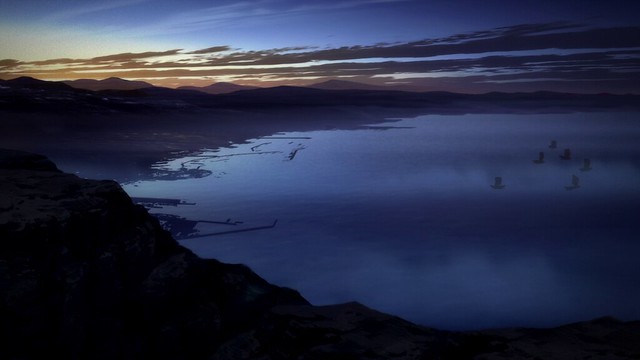 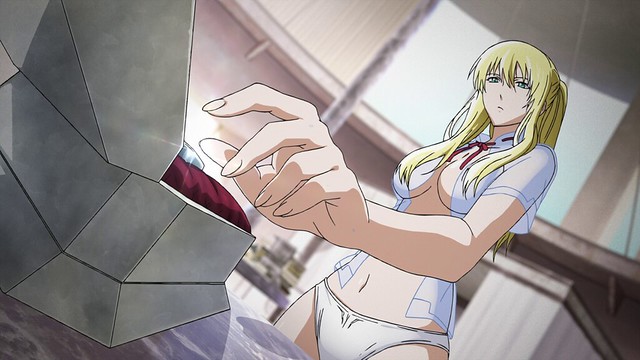 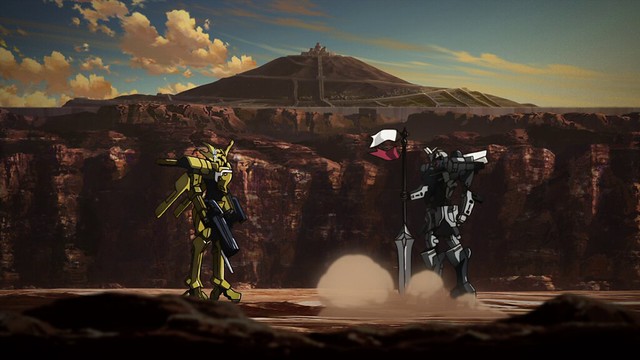 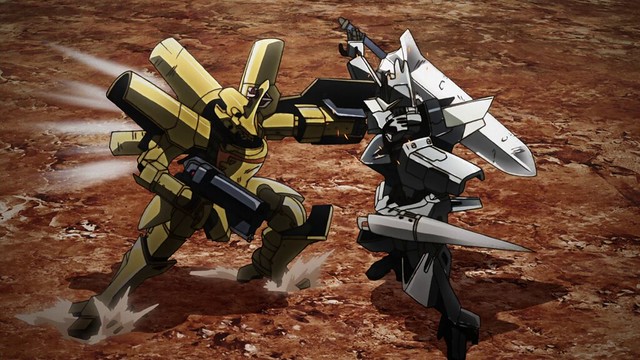 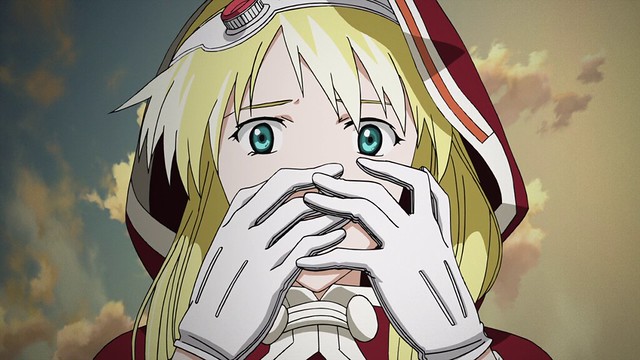 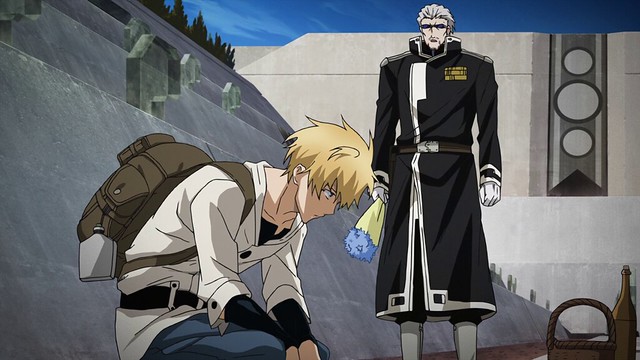 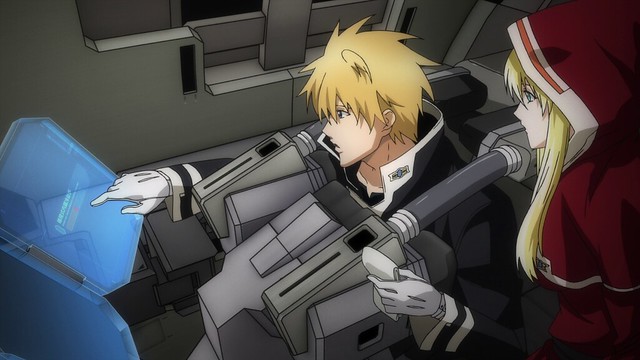 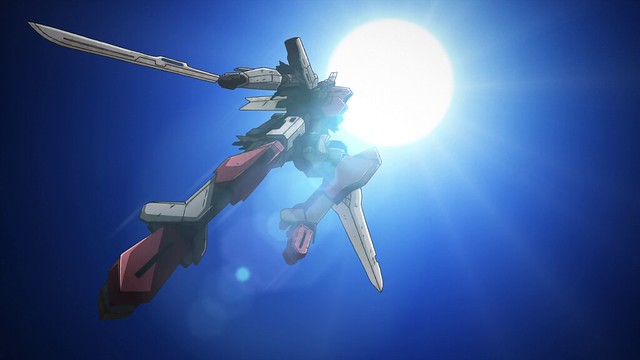 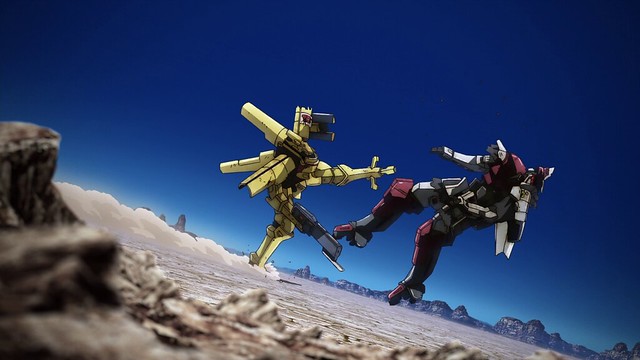 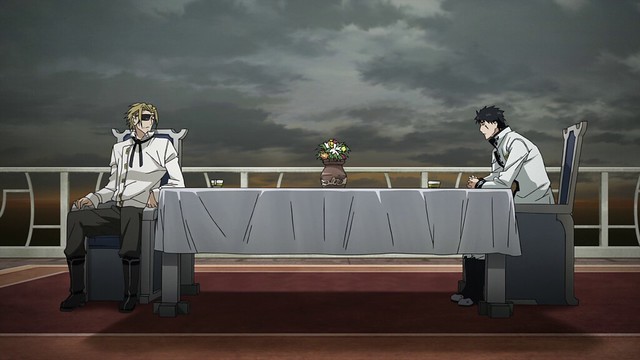 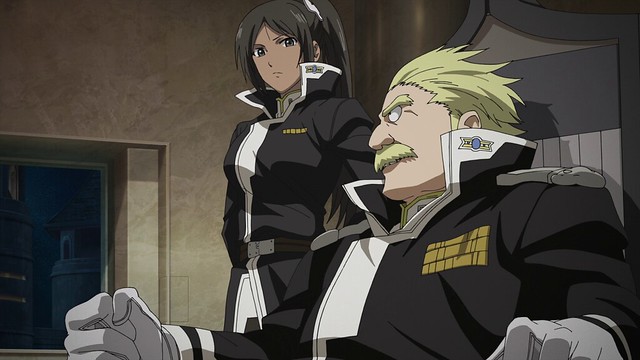 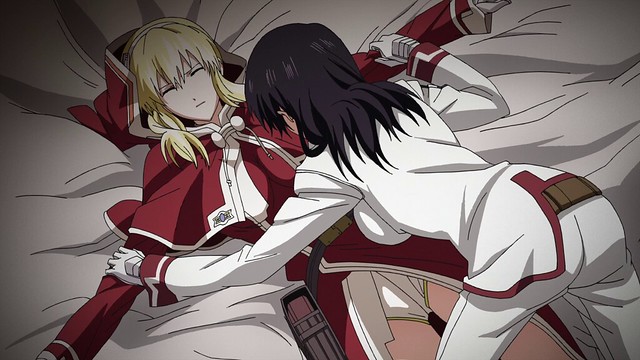 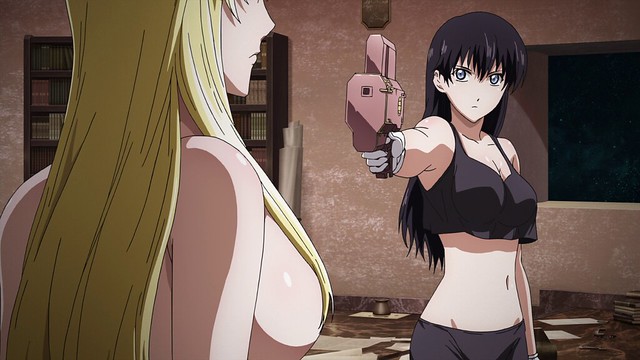 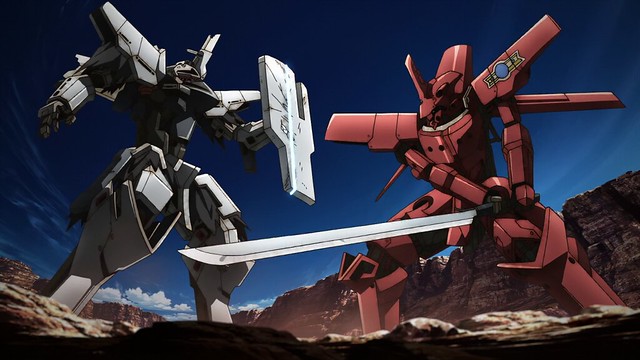 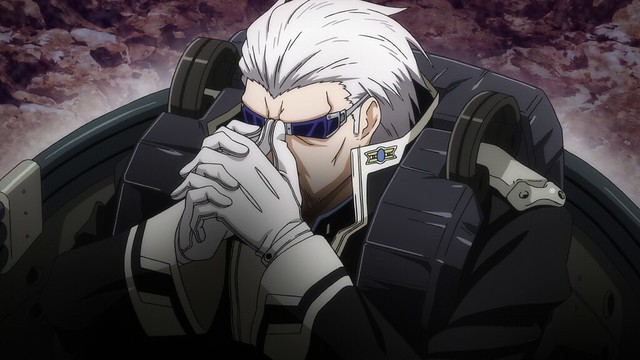 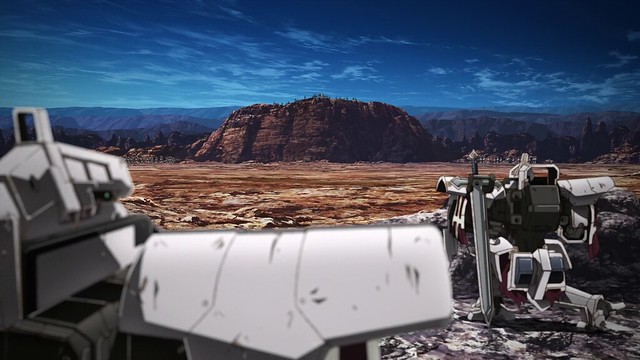 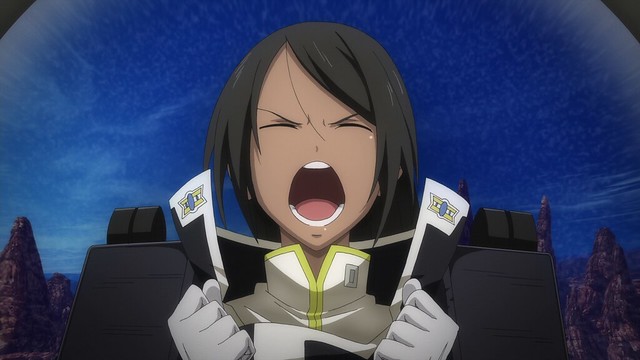 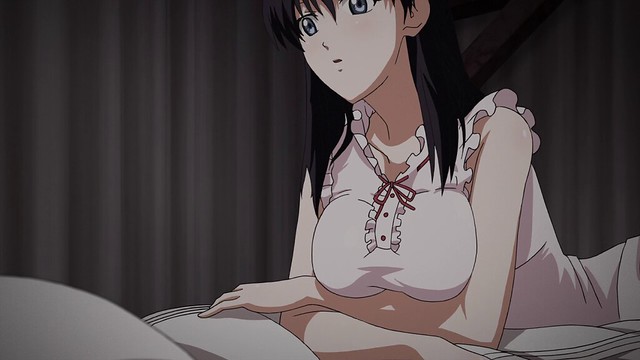 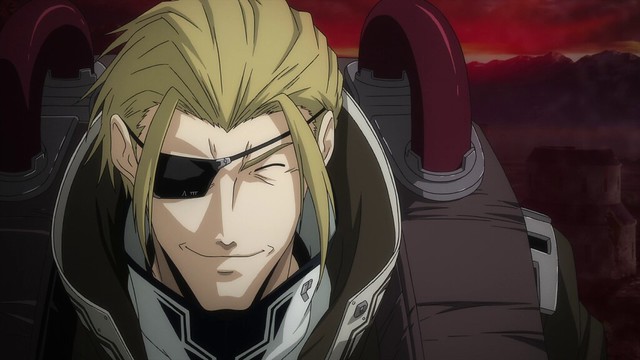 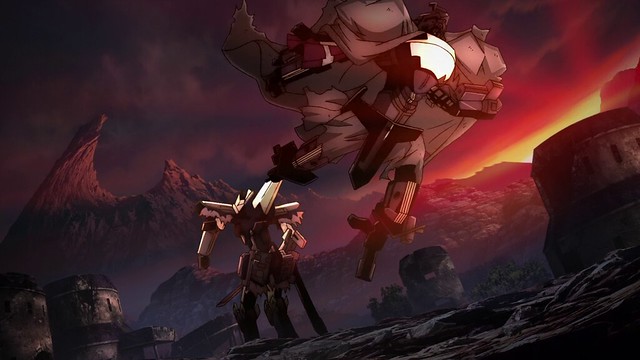 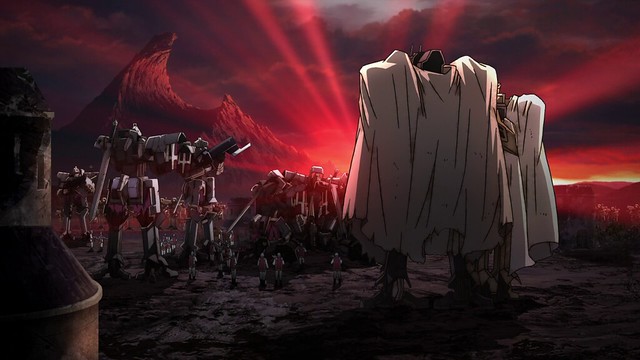 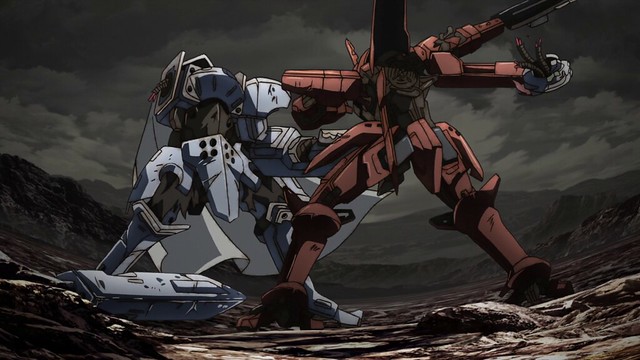 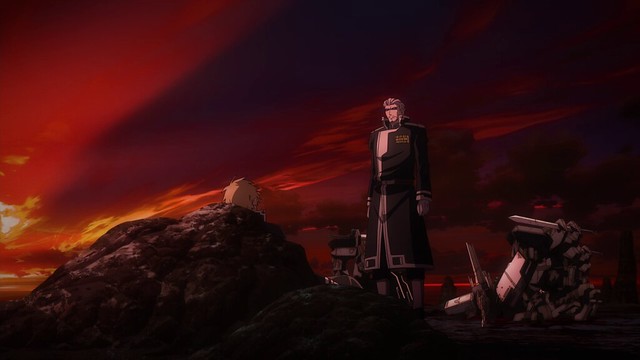 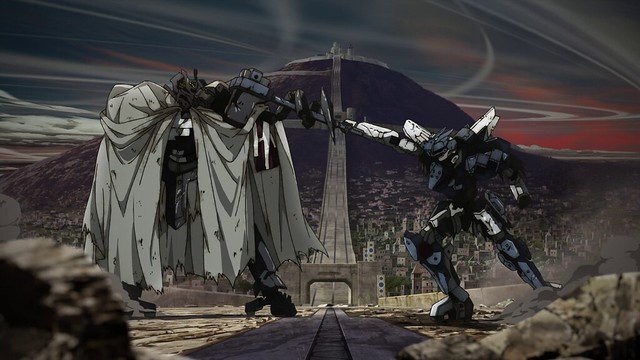 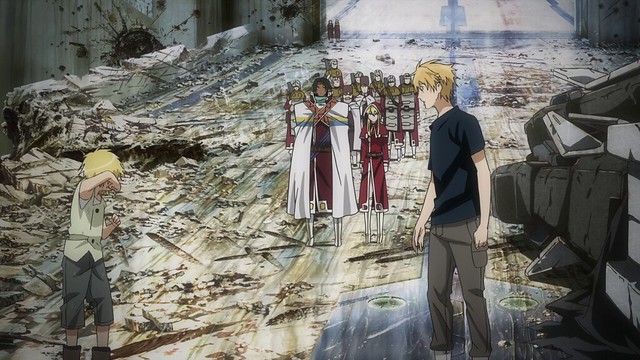 While thematically similar to Gundam Unicorn, Broken Blade differentiates itself in its unique setting. The world-building in Broken Blade is excellent, from the application of quartz in everyday life to military application, and its significance as an industrial resource to the point where nations are willing to spill blood to secure it. Quartz is so integrated into life that from things as simple as a coffee machine, right up to military hardware, all utilise quartz in some way. The Golems themselves are thoughtfully presented in Broken Blade: owing to their engineering and construction, they are incapable of sustained flight, and this prompts Golem combat to play out in a completely different manner than in something like Gundam Unicorn. The quartz-based technology leads to chaotic and bloody combat sequences between Golems, where engagements are fought with pressure guns at range and melee combat at close quarters. The physical nature of each engagement sees bullets chip away armour, blades cracking from use and entire Golems crumbling into scraps when defeated. Coupled with the stand-out portrayal of the rocky, arid terrain surrounding Binoten and vivid skies, the world that Rygart lives in is a tough one, but also one where the inhabitants have found a way to survive. Broken Blade excels in presenting these smaller details along with Rygart’s journey as a pilot and his determination in saving Sigyn, Hodr and Zess from a complex war that none want to be a part of. Altogether, Despite its age, Broken Blade is something that I can recommend to viewers who are fans of mecha series with a fantasy piece to it: Broken Blade represents an engaging journey that I certainly enjoyed, being a series with engaging world-building and characters, exceptional visuals and riveting combat sequences.