Star Wars Battlefront II: A Reflection on the Campaign

“We’ve been fighting for our whole lives. It’s taken us too long to realise that we were fighting for the wrong side. This war is far from over. We would like to help you, if you’ll let us.” –Iden Versio

After she allows herself to be captured by the Rebel Alliance, Iden Versio escapes from captivity and erases a coded transmission the Rebels had acquired concerning the Emperor’s plan for Endor. While on an assignment to neutralise the Rebel forces that landed at Endor, the second Death Star is destroyed. Iden and Inferno Squad (Del and Gideon) comply with orders to retreat and secures TIE fighters, rejoining the Imperial Forces and meets with her father, Admiral Versio. With the Emperor’s death confirmed, the Empire begins to enact Operation Cinder, a contingency plan that would have seen the destruction of Imperial worlds. After Del encounters Luke Skywalker on Pillio during a mission to destroy the Emperor’s storehouse, Meeko and Iden are sent to Vardos to extract Protectorate Gleb. Witnessing the Empire’s disregard for its own people, Meeko and Iden defect to the Rebel Alliance. They meet Lando Calrissian, who gives Iden and Del a chance to prove themselves as being trustworthy by having them participate in the liberation of Naboo alongside Princess Leia. Iden and Del are then sent to Takodana to find Han Solo, who was locating an Imperial defector holding the key to freeing Kashyyyk. Iden learns that Gideon is on Bespin and commences an operation to capture him alongside Admiral Versio, but the two manage to escape. Lando, meanwhile, heads to Sullust to secure an Imperial weapons cache, but ends up destroying the munitions factory there. The Empire is pushed into a corner, and the Rebel Alliance launches one final attack on the weakened Imperial fleet at Jakku. Iden boards Admiral Versio’s Star Destroyer and attempts to rescue him, but he resolves to die with the Empire, asking Iden to live a full life. In the aftermath of the Battle of Jakku, Iden and Del share a kiss. Decades later, Del is captured and interrogated by Kylo Ren, who is searching for a map that will lead to Luke Skywalker. Kylo Ren turns Del over to Gideon, who executes him after expressing his disgust at the choices Del had made. This is Star Wars Battlefront II‘s campaign, a short but vivid experience that marks the first time I’ve played a Star Wars campaign since the days of Star Wars Rogue Squadron II: Rogue Leader.

Battlefront II‘s campaign ultimately acts as a highly cinematic tutorial for players looking to get into the multiplayer, providing nonstop fanservice in allowing players to experience the story from the perspective of heroes like Luke Skywalker, Princess Leia, Han Solo and Lando Calrissian. Iden’s own story is a compelling, if generic one, exploring how the Empire’s atrocities and determination to hold onto power in accordance to Palpatine’s wishes was something that even some of the Imperials did not agree with. The campaign thus shows that Palpatine’s preferred approach in ruling by fear meant that in his absence, the Empire was only loosely held together and disintegrated within a year of his death, which stands in contrast with the extended universe, which saw the Empire continuing to wage war against the New Republic. The divergence of the story between what is official and what is now part of the legends means that some of the latter’s greatest stories will never be brought to life, and while the story of Battlefront II might have been familiar in its presentation and themes (compared to the more complex themes the extended universe deals with), DICE’s implementation of the campaign means that in addition to being a good entry point into Battlefront II, it also provides an authentic and rather enjoyable Star Wars experience: famous planets and weapons are reproduced faithfully, as are the characters and starfighters. Overall, while perhaps nothing remarkable from a thematic or narrative perspective, the technical excellence of Battlefront II‘s campaign, in the visuals and sound engineering, shows that the technology and resources definitely exist to make a Star Wars game of the same enjoyment as something like 2001’s Rogue Leader. 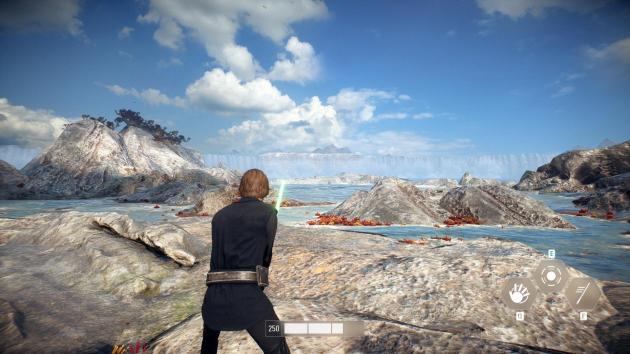 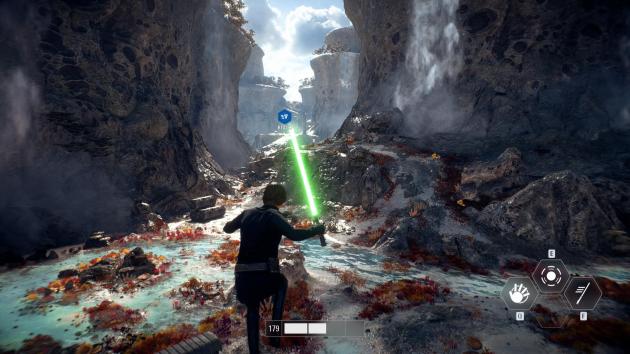 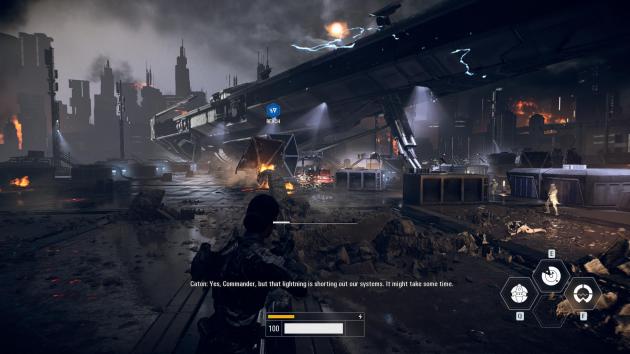 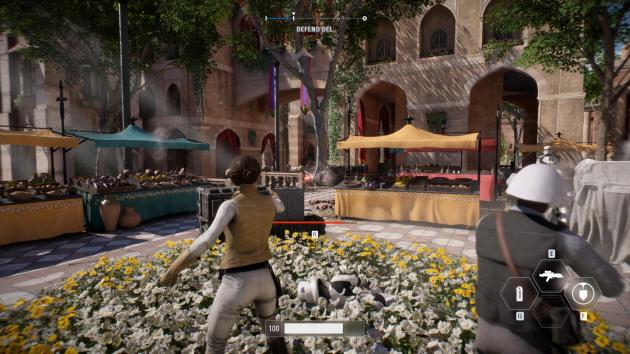 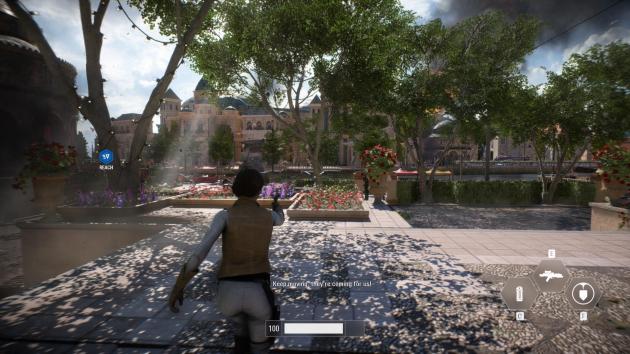 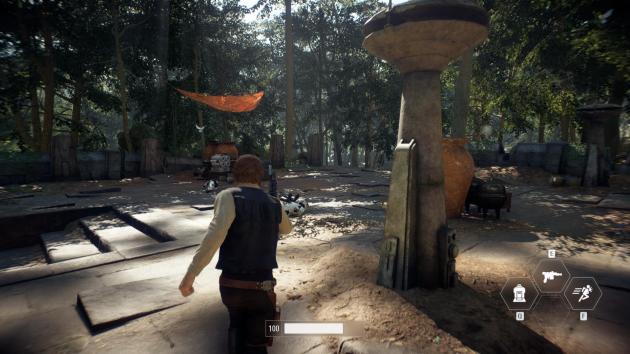 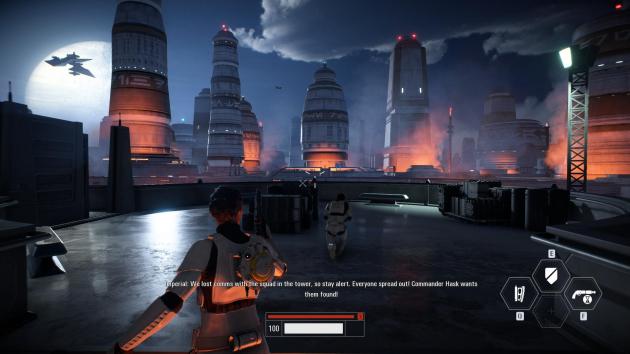 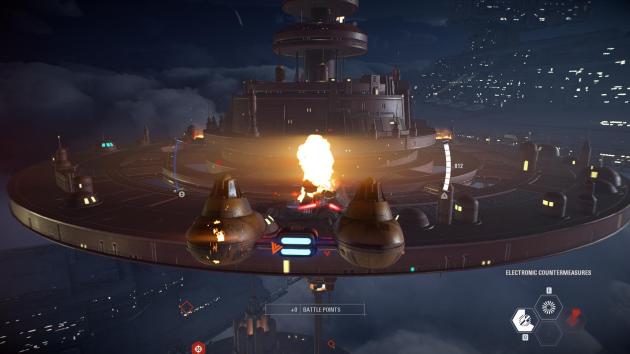 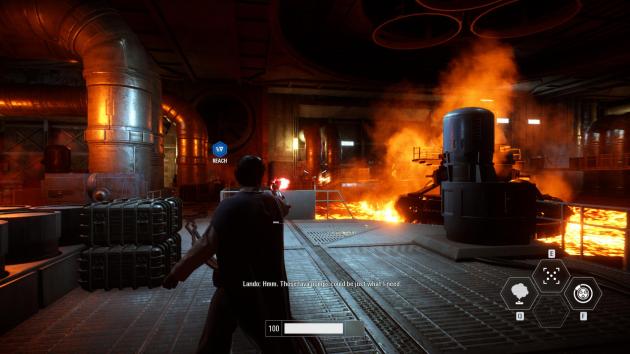 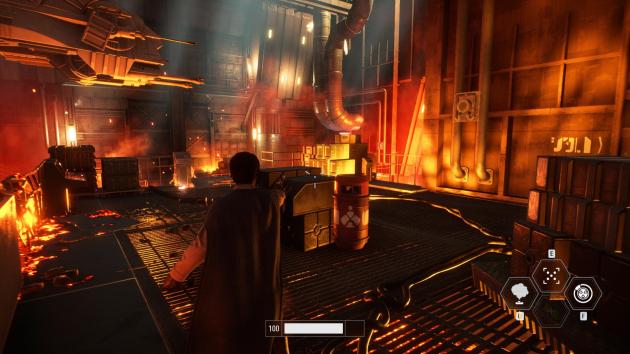 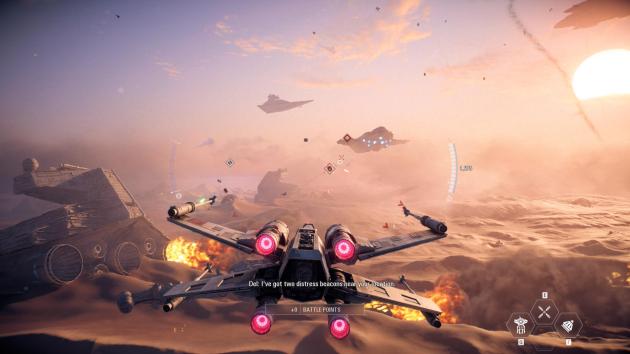 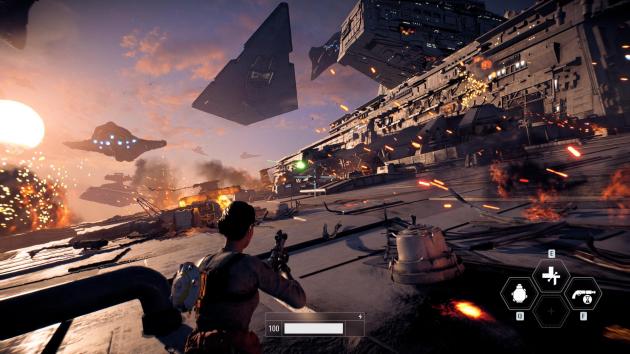 With the first campaign now in the books, I still have yet to go through Battlefront II‘s Resurrection campaign, which is set between the events of the first campaign and The Force Awakens. There is a surprising amount of depth to Battlefront II, and having given the multiplayer a short test drive, I am genuinely impressed with how far the game has come since its initial launch in 2017, where its microtransaction and progression system create a controversy so large, it impacted policy change surrounding how microtransactions could be implemented in a game. Since then, DICE tirelessly worked to improve Battlefront II, and players going into the game today will not see any of the elements that caused said controversy two years previously. Progression is simply accomplished by using a class, reinforcement or hero. Battlefront II has seen three seasons’ worth of updates that added new maps, game modes and heroes free of charge: the game now has Clone Wars content and more options for solo play. Seeing all of the development effort and care that went into Battlefront II is, in conjunction with a well-timed sale, why I picked the game up: good Star War games are rare these days simply because there aren’t very many of them, and Battlefront II comes the closest to being a modern incarnation of Rogue Leader, which remains my favourite classic Star Wars game of all time for giving players a chance to re-enact classic Star Wars experiences. Battlefront II may not allow players to fly down the trench of the first Death Star or fight the Battle of Endor the same way that Rogue Leader did, but by expanding on the universe and placing players at key moments after the second Death Star was destroyed, the game does succeed in bringing back the mechanics and atmosphere that makes Star Wars so enjoyable.

Star Wars Battlefront: A Reflection on the Beta

“That armour’s too strong for blasters!” —Luke Skywalker, The Empire Strikes Back

To fight on Hoth alongside the Rebels, or leading the rush against the Hoth base in an AT-AT has long been the stuff of every Star Wars fan’s dream. With the announcement of Star Wars Battlefront (the third installment), this dream has become a reality, and the title has garnered much excitement ever since trailers and gameplay of the Battle of Hoth were shown during E3 2015, along with images of Endor, Tatooine and Sullust. Thus, when the open beta began on October 8, I decided to drop in and give Star Wars Battlefront a try, playing through Survival on Tatooine before dropping into Drop Zone on Sullust, a gametype quite similar to Halo’s crazy king, where Rebels and Imperials fight to control drop pods over a ten-minute match. Playing on Sullust had been admittedly a frustrating experience owing to the terrain: at the time, I did not have the jump-pack and encountered difficulty in navigating, leading to frequent deaths. However, I persisted, and I reached rank four after around an hour-and-a-half of Drop Zone, unlocking the A280C for the Imperials and the ion shot powerup, which wrecks havoc with vehicles and machinery. Thus, I dropped into Walker Assault, and found myself fighting for the Rebels, trying to stop the Imperial AT-ATs from reaching the power generators. Walker Assault feels like Battlefield’s Rush gametype, with the intent of activating uplink stations to call in as many Y-Wings as possible to bomb the AT-ATs, weakening them and opening them to damage. I’ve heard grievances that Walker Assault is horribly unbalanced, and thus, it was not surprising that I lost my first Walker Assault match. However, around six hours later, I’ve been performing much more consistently, making use of power-ups, vehicles and even the heroes to aid my team.

With eight hours under my belt over the past four days, I’ve begun noticing some of the issues that’ve crept up, starting with the spawns. There have been times where I spawned in and died instantly from enemy fire, or else, was running around, encountered an entire group of opponents and cleaned them out with a combination of thermal detonators and DLT-19 fire. This is the beta, but hopefully, DICE will fix this before the game officially launches. In addition, the control schemes for vehicles feel extremely stiff even when the sensitivity is set to maximum, making it difficult to fly an X-Wing or TIE fighter smoothly. Controlling an AT-ST or a stationary turret is also difficult. Moreover, team balancing can sometimes be frustrating, with one team absolutely decimating the other without any teams being mixed around to improve the distribution of skill. With this being said, I find Star Wars Battlefront to be an incredibly fun experience after beginning Walker Assault. The shooting mechanics feel solid, capturing what it would feel like to shoot a Star Wars blaster in terms of both visuals and audio: it is incredibly rewarding to fire the same guns that were used on the original movies. The bolts don’t travel instantaneously, so one must lead their aim for distant targets. When every shot does land, it is immensely satisfying. The combination of cards that confer special abilities (like the aforementioned thermal detonator and ion shot, but also encompassing a jetpack, personal shield and single-shot slug-thrower) allow for players to customise their play-style: I’ve used all three cards in conjunction with power-ups to go on kill streaks and capture objectives, and the presence of power-ups provides players with mini-objectives to compete for. All of this, coupled with phenomenal graphics, means that players feel like they’re a part of the Star Wars universe, fighting for the Rebel or Imperial cause. 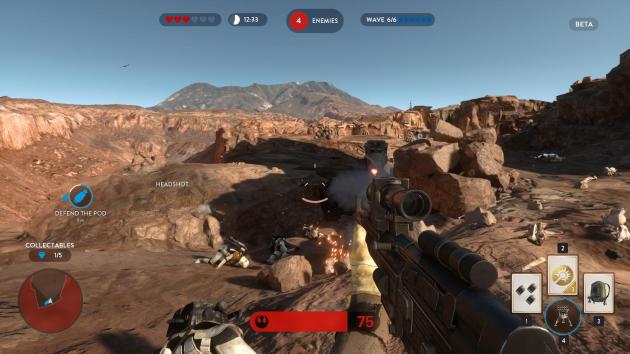 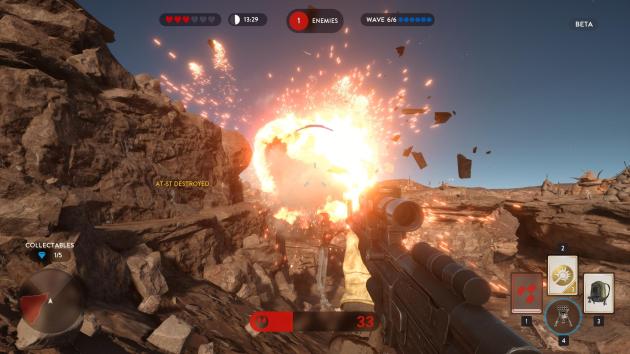 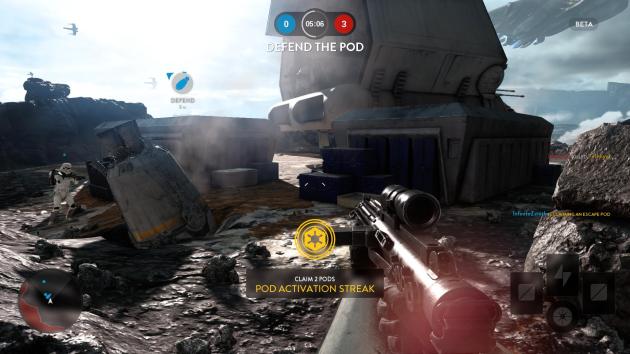 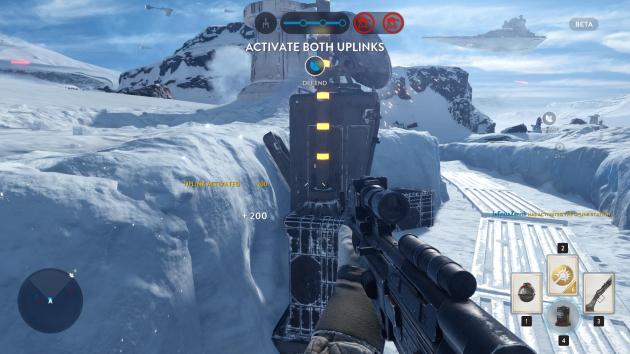 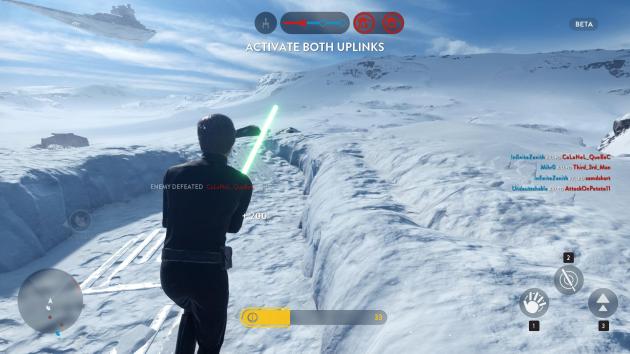 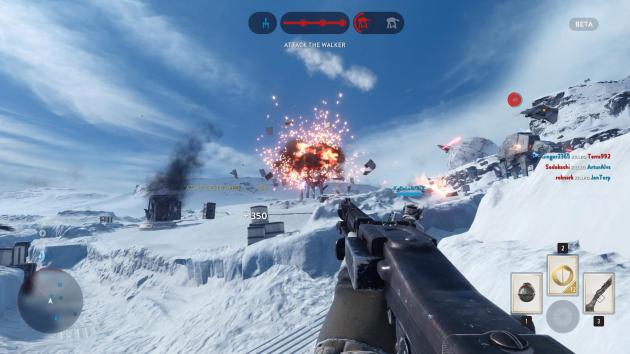 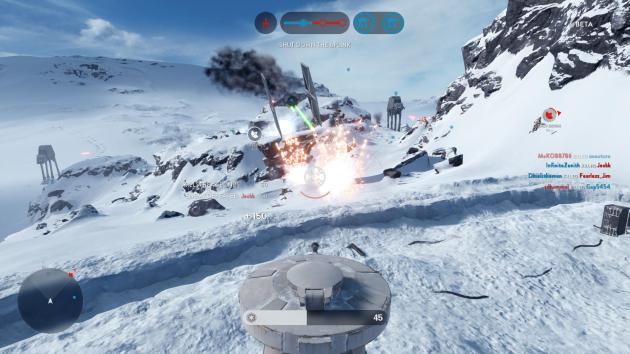 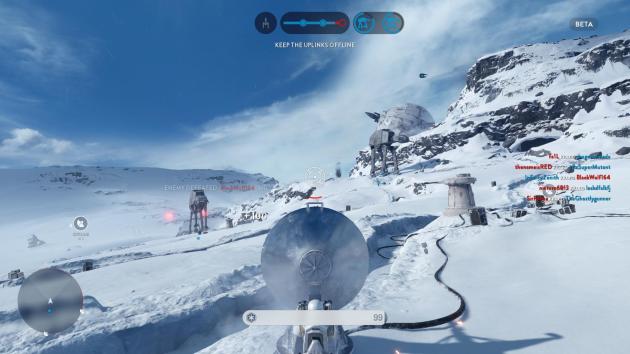 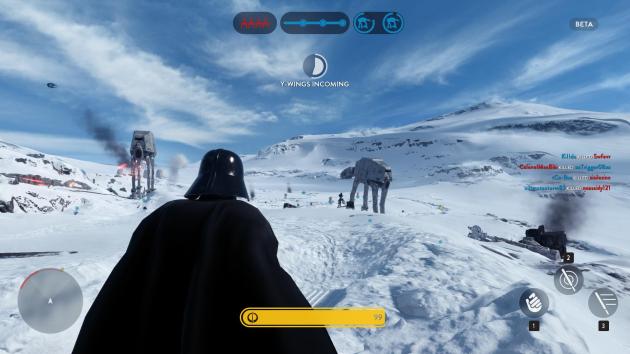 The question thus becomes: will I pick up Star Wars Battlefront on launch day (or shortly after)? The beta’s been amazing, and if Walker Assault alone offered this much replay value, one could only imagine the spectacle and enjoyment coming from the other game modes (assuming they’re as well-designed). I definitely enjoyed Star Wars Battlefront‘s beta for its beautiful depictions of the worlds in Star Wars, the faithful sound effects and lighting effects; in fact, I spent practically the entire Thanksgiving long weekend playing it. However, I probably won’t be getting it shortly after launch. Granted, the game’s been incredible, handling smoothly with respect to both gameplay and connectivity (I never once died due to lag), but I’m curious to see how the other game modes play out first, such that I might make a more informed decision. Being able to fight the Battle of Hoth for myself, and watching the Rebellion take out the AT-ATs before they could smash the generator was quite an experience: the vehicle, weapon and map design are completely faithful to the scenes from The Empire Strikes Back, giving the sense that one’s really part of the movie. While I’m likely to wait for a bit more information before deciding whether to buy shortly after launch, Star Wars Battlefront has definitely ignited my anticipation for the upcoming Star Wars movie, which is set to premier on December 18.