Mirai no Mirai: A Review and Full Recommendation

5 Comments Posted by infinitezenith on February 4, 2019

“Siblings are the people we practice on, the people who teach us about fairness and cooperation and kindness and caring – quite often the hard way.” –Pamela Dugdale

Accustomed to being showered with love and adoration, Kun is a four year old boy who lives in Isogo-ku,Yokohama, spending his days with Yuuko (the family dog) and his train sets. When his parents welcome Mirai into the family, Kun grows jealous of the attention his baby sister is receiving. After one tantrum, Kun runs into the courtyard and finds himself face to face with Yuuko in human form: he learns that Yuuko has been left behind somewhat ever since he was born, and subsequently passes along to his parents that Yuuko should be better treated. Each of the more substantial tantrums that Kun throws activates the tree in the courtyard that sends him to another time. He comes face-to-face with a middle school-aged Mirai, who warns him about mistreating her and enlists his help in putting away dolls the family has set up for Girls’ Day. Kun also is transported back in time to when his mother was around four after refusing to put his toys away and learns that she too was scolded for making a mess of things. After Kun’s father focuses his attention on a crying Mirai at the park while they were originally set to help Kun learn to ride a bike, Kun grows angry and runs off. Here, the tree in the courtyard transports him to his great-grandfather’s workshop. His great-grandfather suggests to him that the key to overcoming fear on any vehicle is to look ahead. Later at the park, Kun manages to learn how to ride a bike on his own. When the family prepares to go for a trip, Kun refuses since his favourite pants are unavailable. He is seemingly left behind, finds himself at a train station and boards a train despite an older boy’s warnings. Arriving at a vast station, he grows fearful and tries to find his parents, but the attendant remarks that without verification to his identity, he is unable to help and sends Kun to a train that sends him to Lonely Land. Seeing the baby Mirai about to board the train, he acknowledges his identity as Mirai’s older brother, having refused to do so until now, and the older Mirai retrieves him. She then takes him on a journey through the family history, and when Kun returns to the present, he decides that the pants suddenly don’t matter so much anymore, cheerfully joining his parents and Mirai for their day trip. Mirai no Mirai (literally “Mirai of the Future”) is a film that released in July 2018 and is notable amongst the 2018 anime films for being the first anime film that is not from Studio Ghibli to receive a nomination as Best Animated Feature at the 91st Academy Awards.

Running for an hour and forty minutes, Mirai no Mirai is a fanciful and vivid tale of discovery, acceptance and understanding. In particular, this is a film that all older siblings will connect to: the arrival of a new sibling in a family and the shift in attention is an occurrence that all older siblings must go through, and the feelings of jealousy, resentment and loneliness are universal regardless of one’s culture. Children’s media, such as Arthur and The Berenstain Bears each have their own portrayals of this topic, presenting the transition and gradual acceptance of a new sibling in families as a journey. In Arthur, D.W. comes to accept Kate as her sister after running away but realising that Kate needs an older sister to show her the things that only sisters get. The Berenstain Bears‘ Sister is shown a family video of her as a baby and learns that every baby is given a great deal of attention, coming to terms with how her new sister, Honey, is an integral part of the Bear Family. Both presentations are very down-to-earth, and Mirai no Mirai stands out in applying these lessons with a twist: the film utilises bold visuals to express the tumultuous thoughts in one’s mind during childhood. Whether its a bustling train station or luxuriant garden, Kun’s lessons seem come from within: his own discoveries act as the lessons that push him towards accepting Mirai and his parents. The generous use of these flights of fancy indicate that children are very complex and capable of finding their own answers; whether it be Arthur, The Berenstain Bears or Mirai no Mirai, no adult explicitly explains why babies draw attention away from the older sibling. Instead, the older sibling, through their experiences and observations, comes to terms with things on their own. It’s a journey that has a bit of mystery to it: children are observant and bright, but may have trouble articulating their thoughts, and so, with its imagery, Mirai no Mirai aims to both show how remarkable families are, as well as make tangible something that we otherwise might take for granted. It is a story of the extraordinary amidst the ordinary, and so, Mirai no Mirai is very enjoyable to watch. 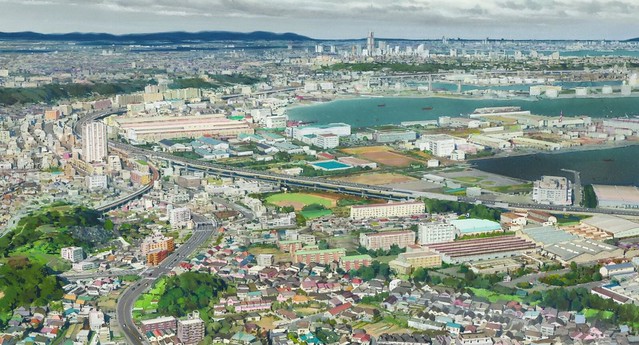 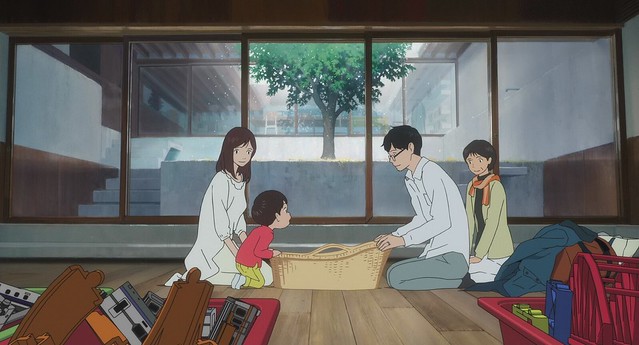 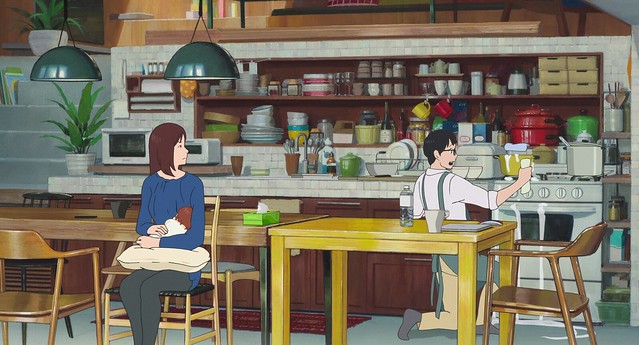 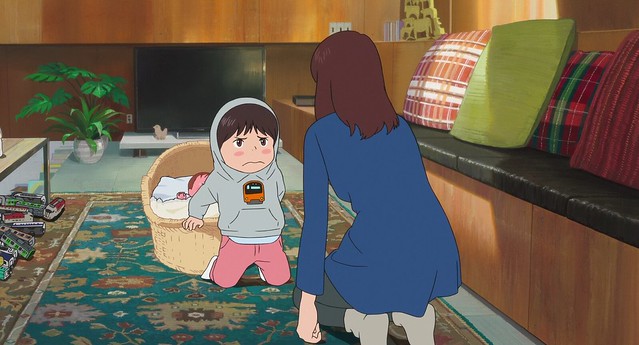 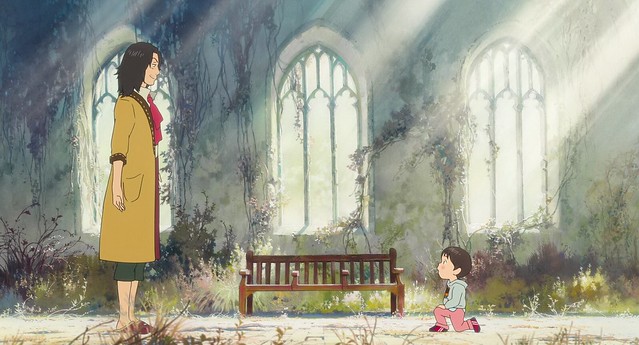 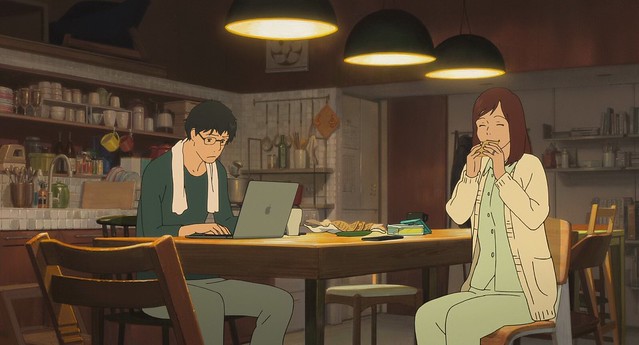 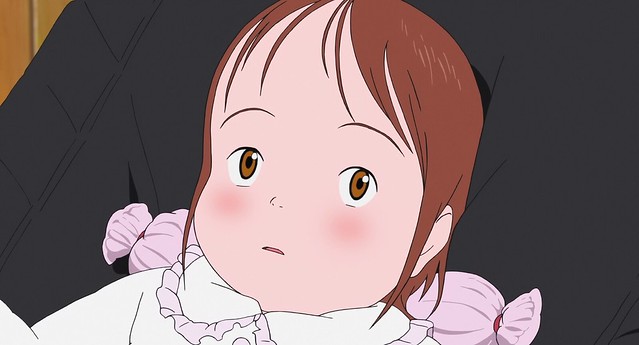 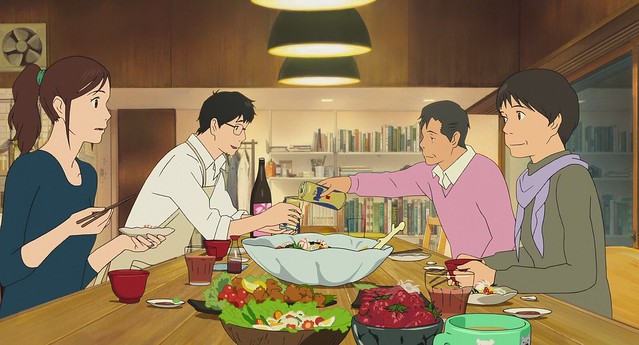 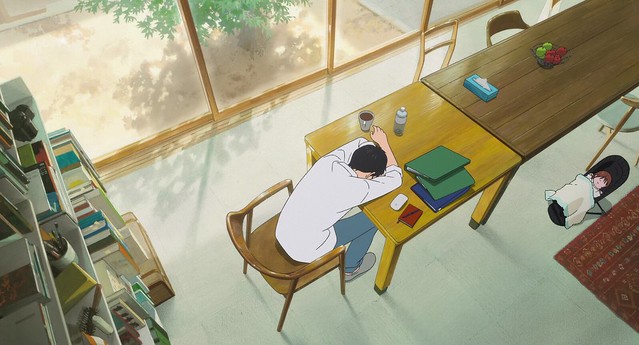 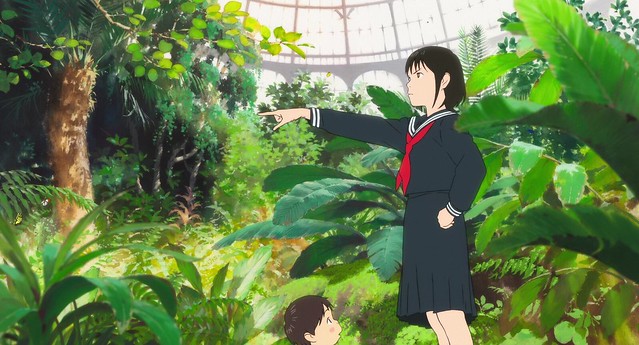 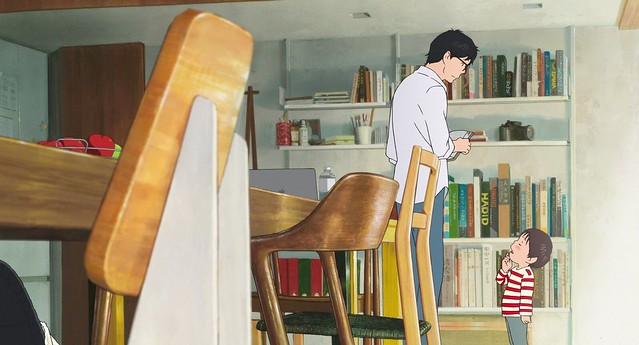 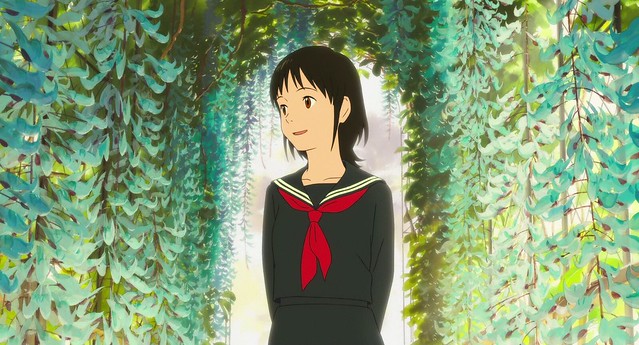 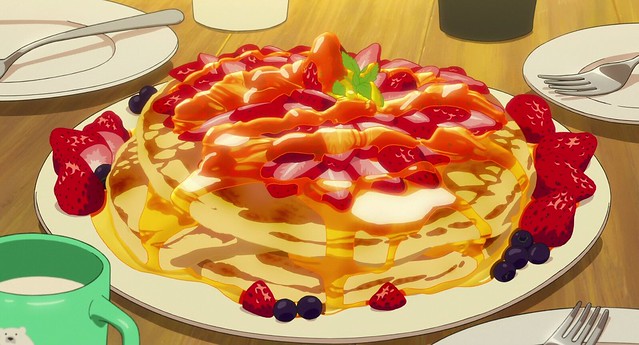 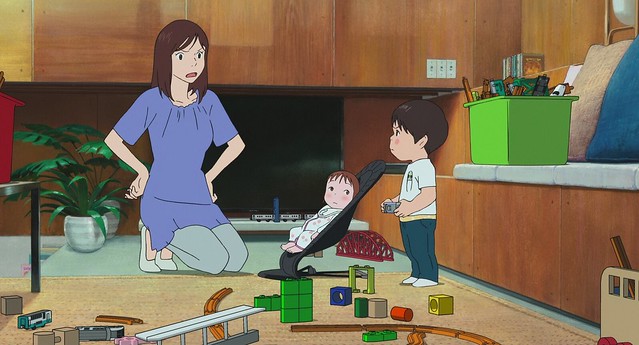 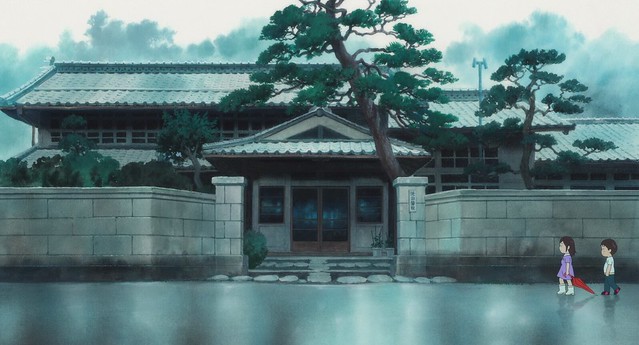 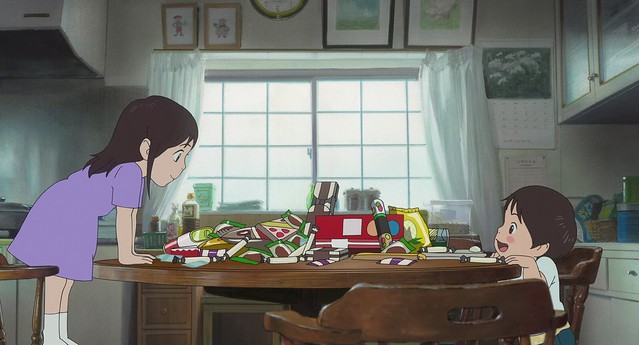 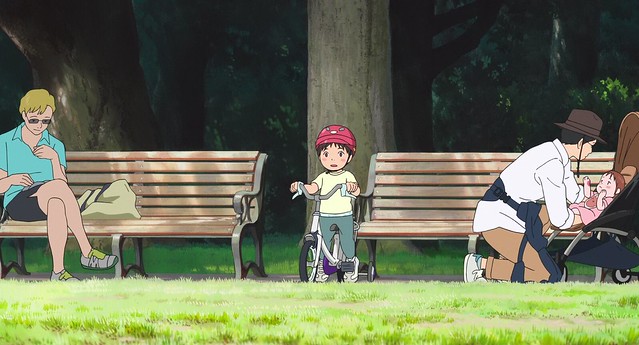 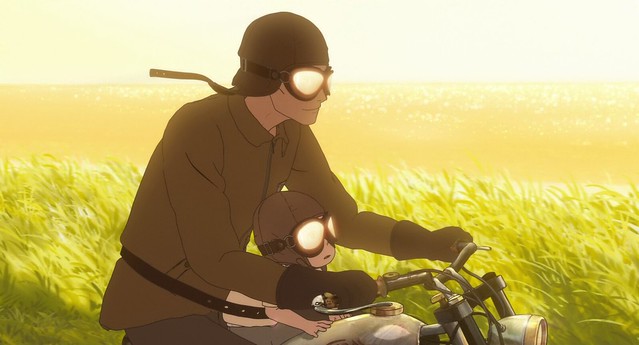 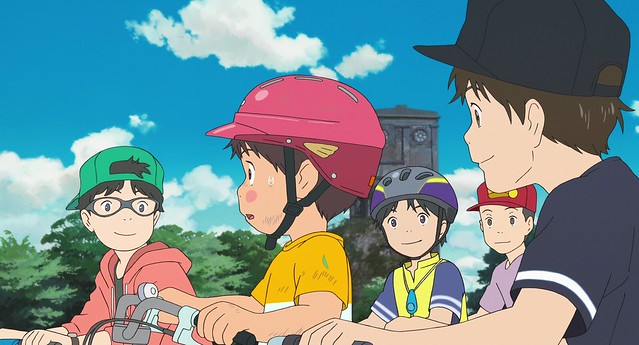 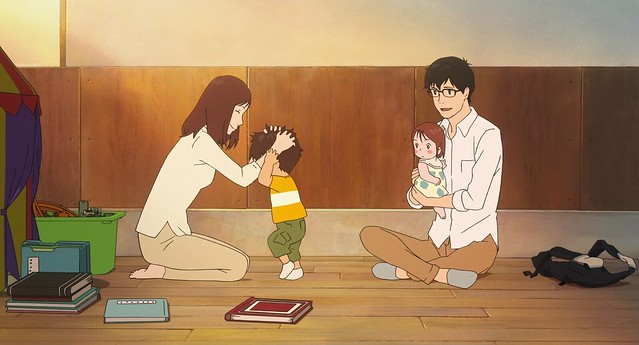 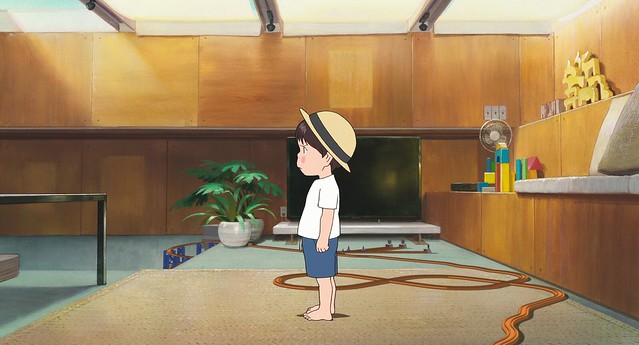 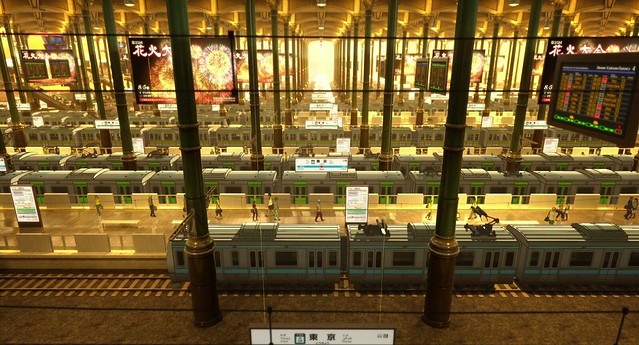 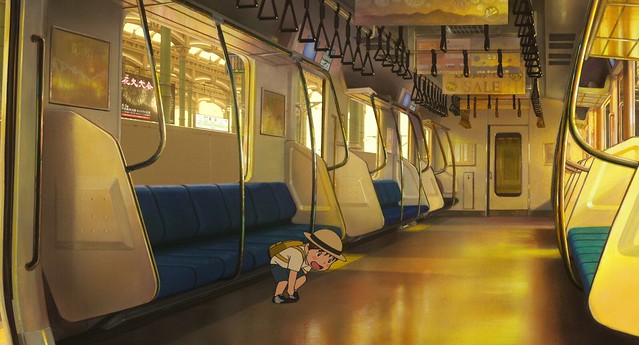 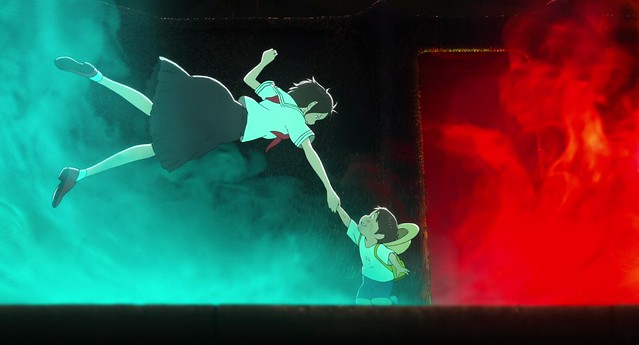 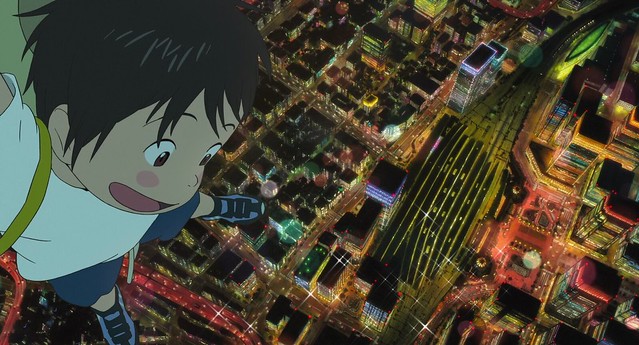 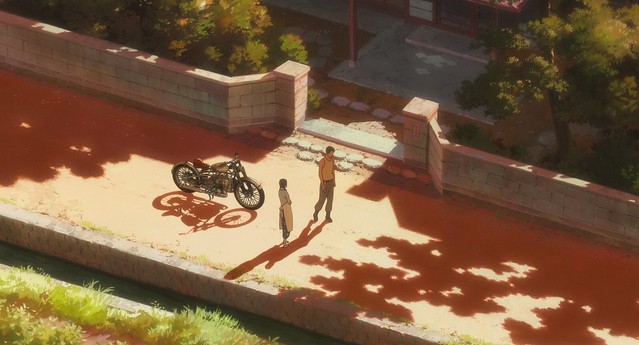 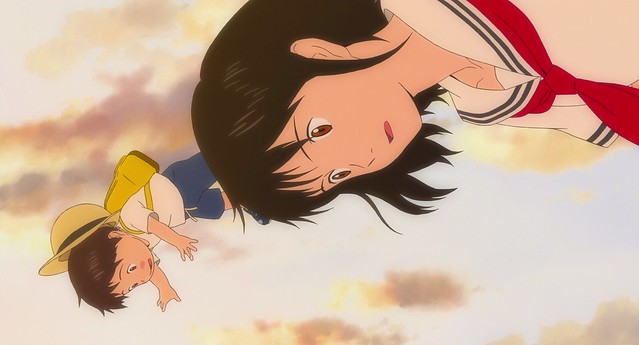 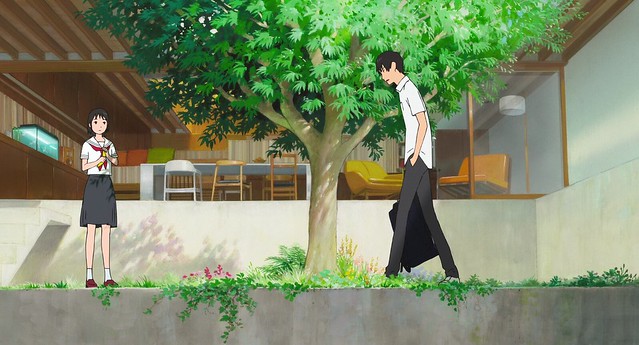 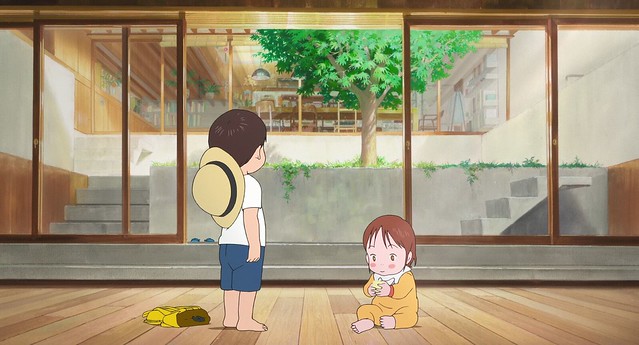 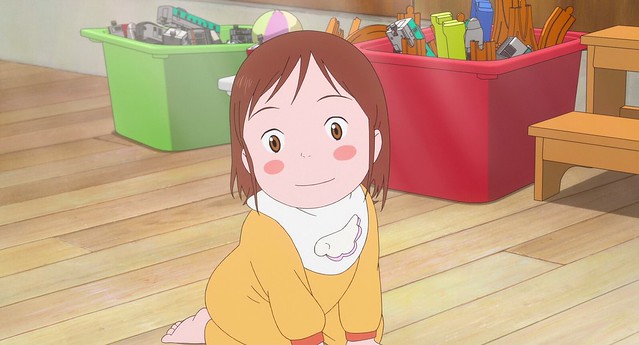 Mirai no Mirai is a visceral representation of the sorts of emotion that older siblings go through with the arrival of a younger sibling. As an older sibling myself, I only have the vaguest recollection of what things would have been like: if my parents’ recollections were anything to go by, I was fairly mild (read “not anywhere as vociferous as Kun”), and I certainly cannot remember what the turning point was. What I do know is that the sort of friendship in some siblings can be very strong, and as such, stories like Mirai no Mirai are particularly moving to watch. Mirai no Mirai also deals with Kun’s father initially struggling to do housework and look after the children; his attempts at cooking and cleaning are fraught with accidents, and he’s unable to hold Mirai without her crying. As time wears on, he figures things out and becomes more proficient over time. Mirai no Mirai‘s portrayal of a husband and wife continuing to learn gives the movie additional depth and is another reminder that parenthood is a time of adjustment and discoveries for the parents, as well. It was rewarding to see Kun’s father going from bumbling through household tasks to having more competence: by the film’s end, he’s holding Mirai without any trouble. Themes of family and learning permeate Mirai no Mirai, and in conjunction with the movie’s solid visual component, it’s easy to see why the film has earned a nomination for an Oscar. Even if the film does not win (I expect that Spiderman: Into the Spider-Verse will win the Best Animated Feature category), Mirai no Mirai remains an excellent film that offers a refreshing take on families as seen from the perspective of a four-year-old, and for this, I have no trouble recommending this film to readers.