The girls celebrate their victory with a banquet, with their festivities accompanied by a contest where each of the teams are judged for their stage performances. 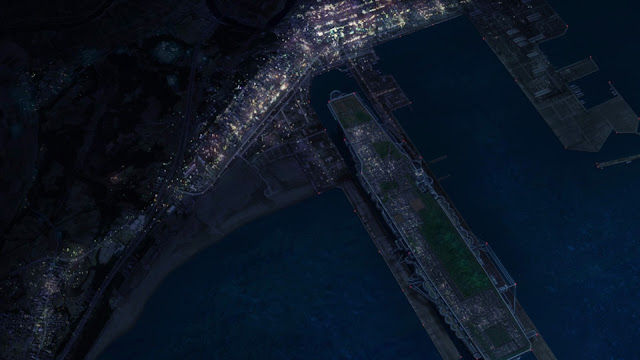 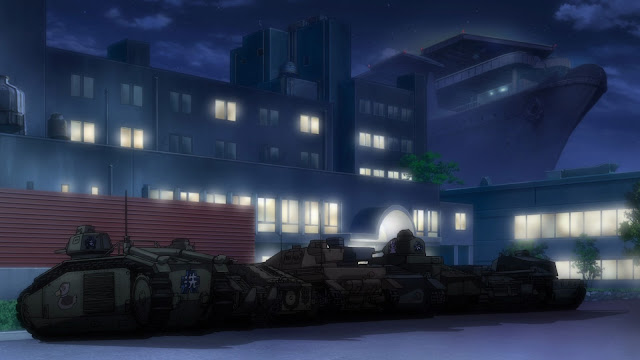 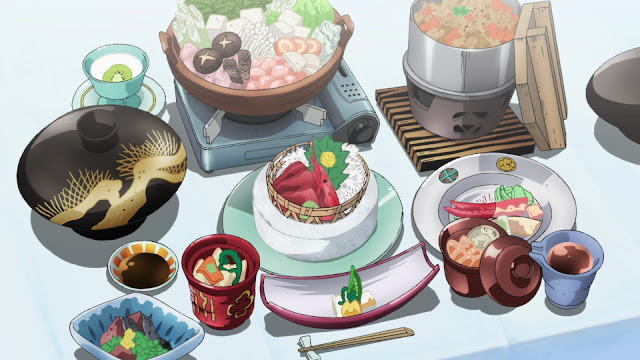 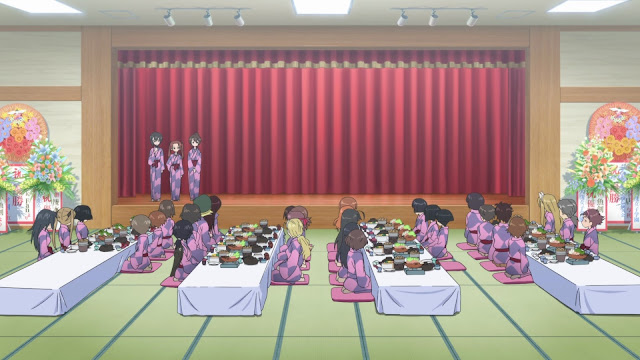 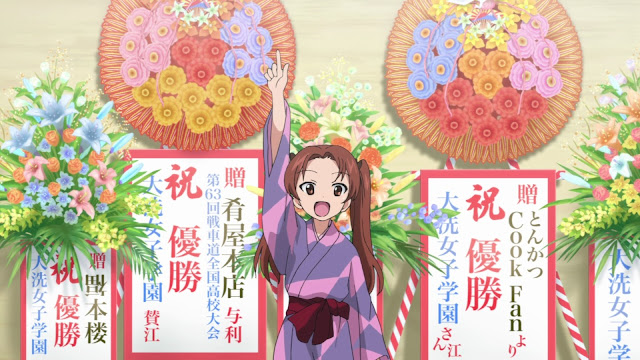 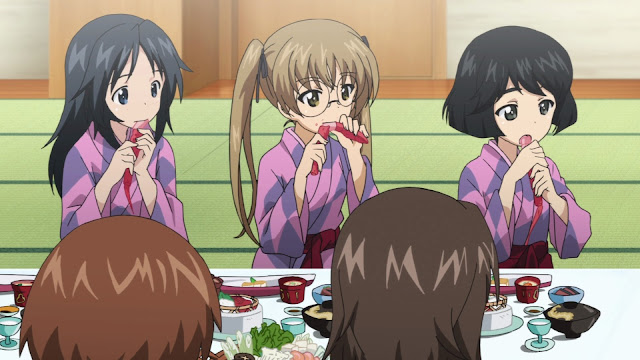 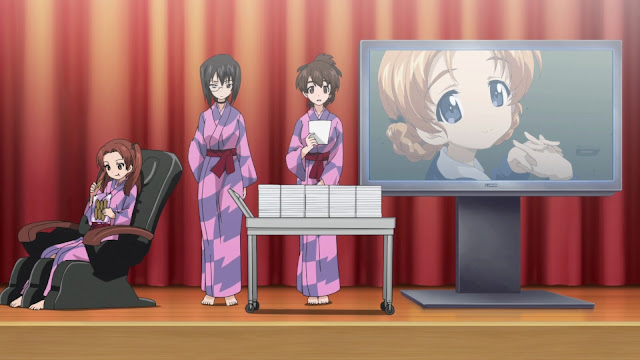 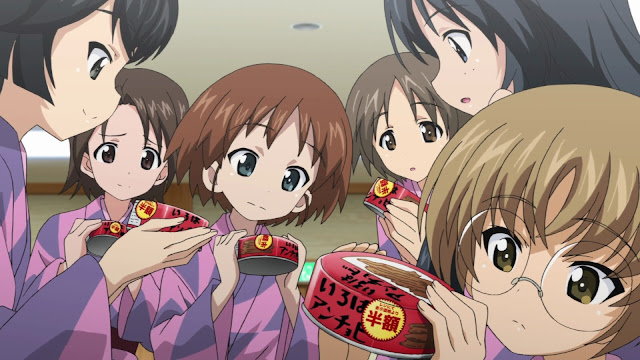 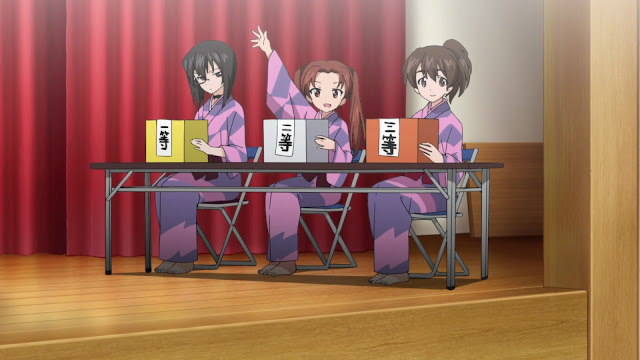 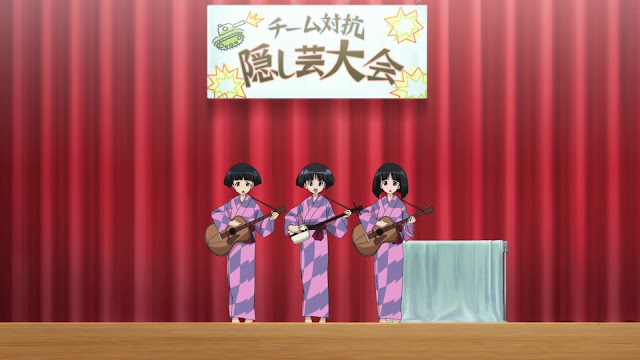 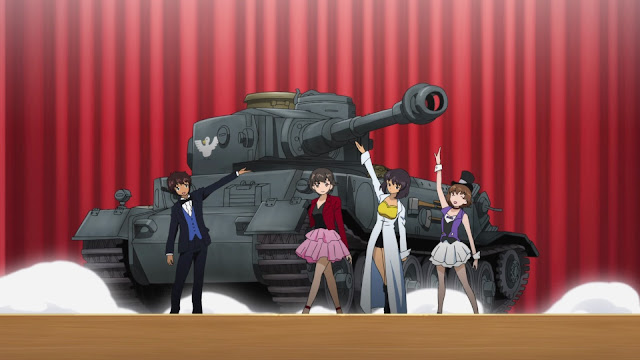 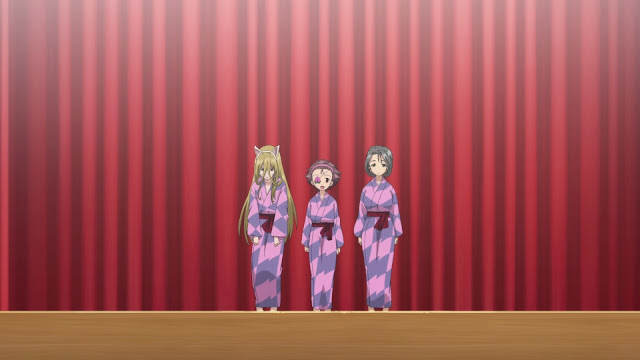 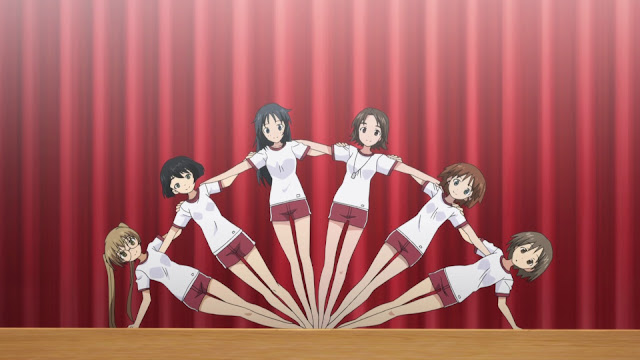 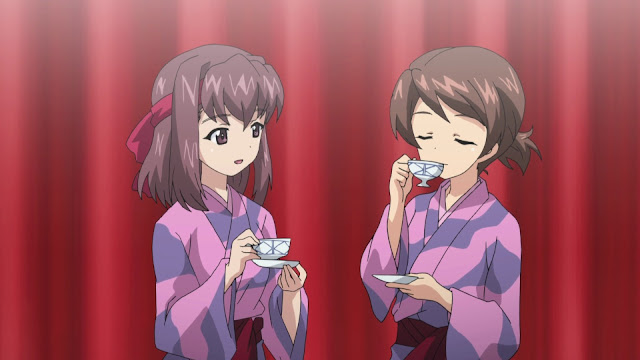 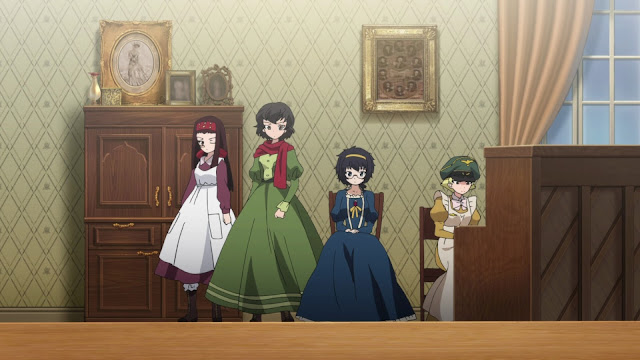 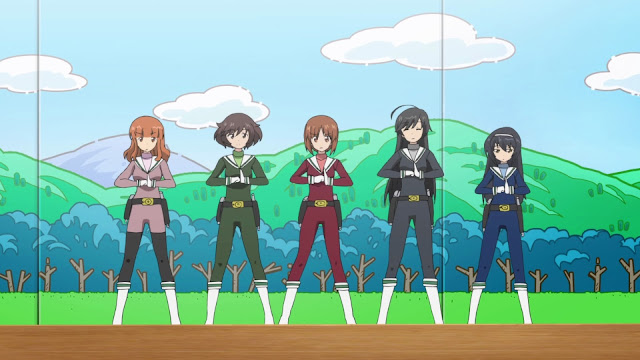 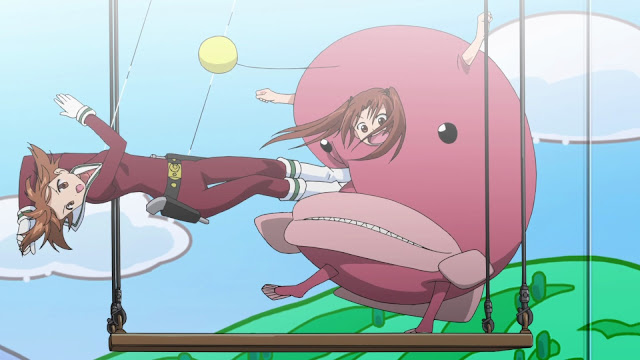 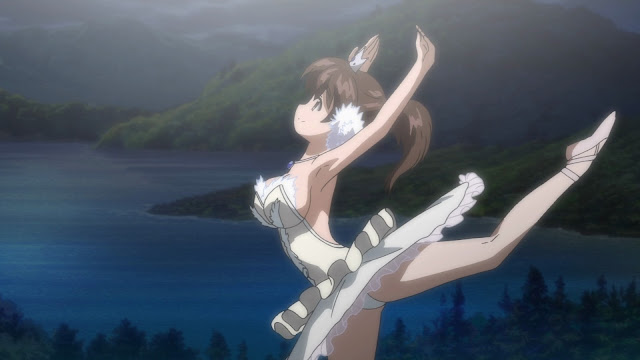 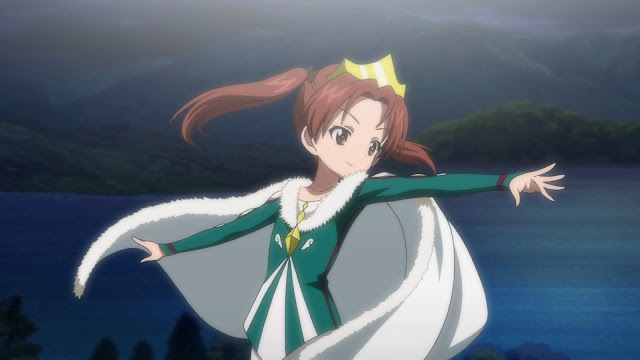 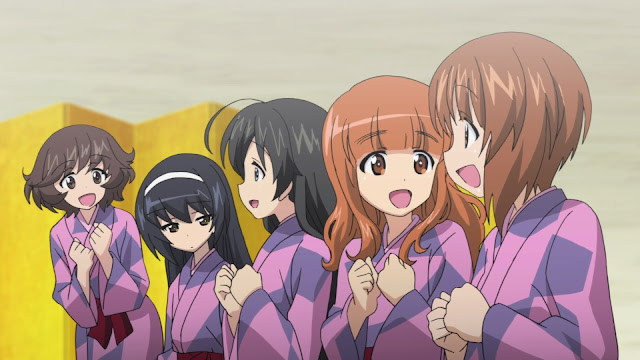 Set after the final match against Black Forest, the final OVA depicts the party the girls partake in. This episode is the longest of the OVAs, and does not disappoint by any stretch, being incredibly fun to watch for all of the unique performances each of the teams give after a banquet of sorts. This is a fitting close to the series for the present, showcasing all of the girls outside of their typical mannerisms through their performances. In particular, Anglerfish team’s super sentai act was enormously satisfying to behold, as was the stuntnastics from the Rabbit Team and the ballet from the Turtle Team. This is not to diminish the quality of the other performances from the other teams, but for me, those ones stood out, and perhaps, unsurprisingly, were marked as the winning teams in the very end. At this point, the last of the Girls und Panzer OVAs have been released, and as such, I will probably not write about Girls und Panzer again until the Anzio battle is released.

Titled “Banquet War!”, the sixth OVA will be included in the sixth and final Girls und Panzer Blu-Ray volume. Said volume is set to hit the shelves on June 21, 2013 and will deal primarily with the festivities surrounding Ooarai’s victory over Black Forest. Set after episode twelve, this episode should be a treat to watch; I anticipate an episode similar to how people might be expected to celebrate after winning the Stanley Cup, for instance.

We recall that the Anzio battle is to be released at some point in the future: at the time of writing, not much is known about it yet, although (thank you, Historynerd ಠ.ಠ) the battle itself is expected to be a harrowing one that is fun to watch. I will discuss my own thoughts on this matter in due course, but for now, all of the OVAs have released. My only real expectation for OVA 6 (and OVA 5) is that they are not short features: OVA 2 and 3 proved to be a real treat to watch for their length, and I’m hoping that 5 (and 6) will deliver just as nicely.

The girls perform the Anglerfish dance in various localities around Ooarai. 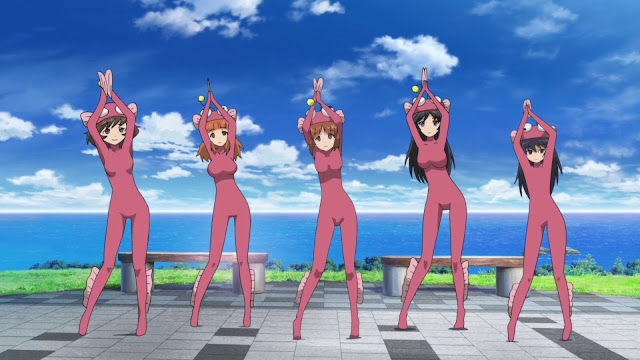 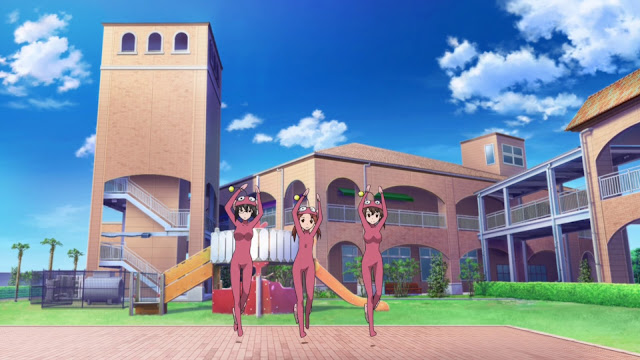 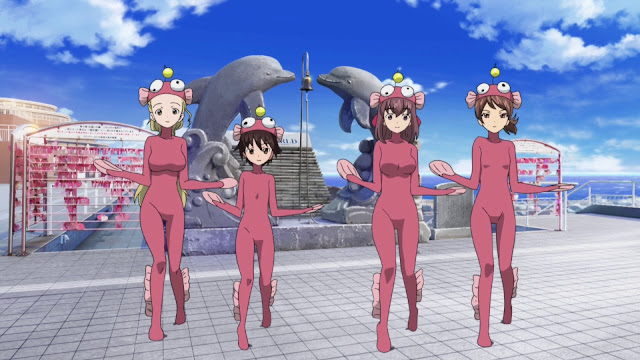 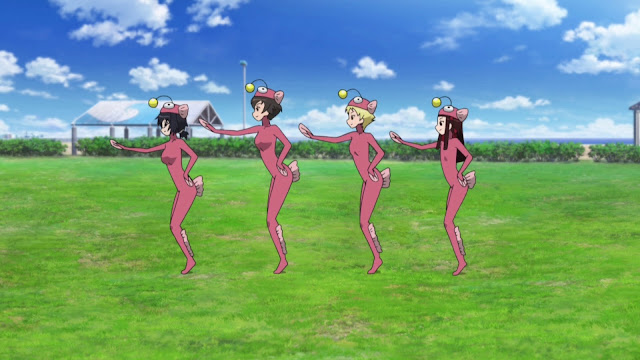 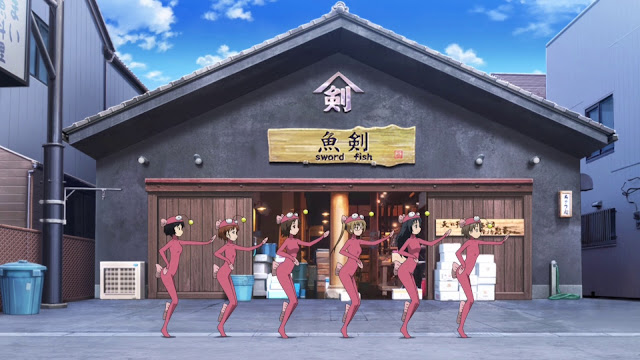 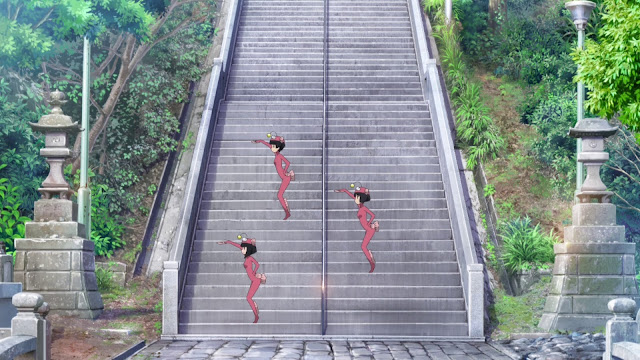 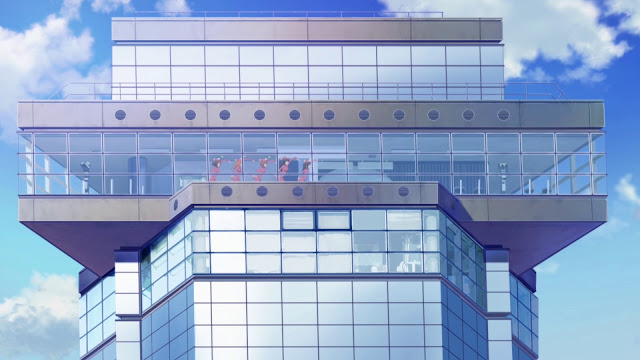 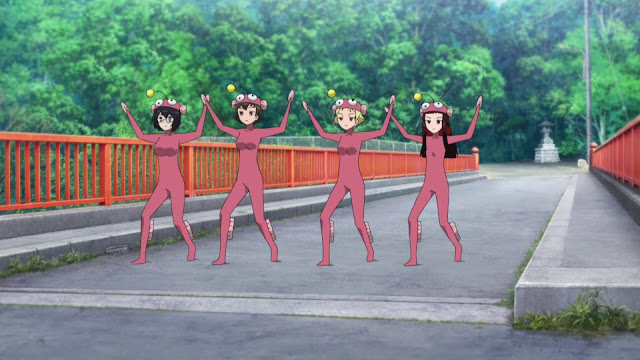 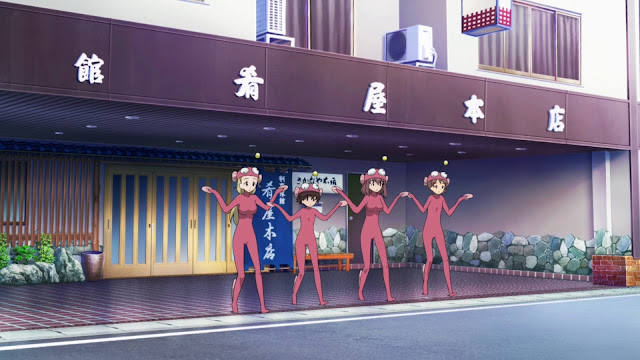 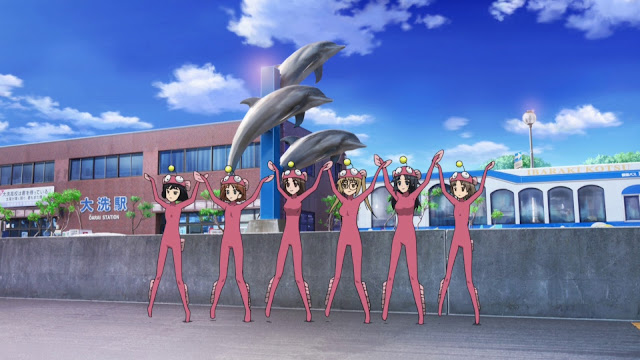 This OVA is on the short side: a total of 3 minutes and 50 seconds, only 2 minutes and 57 seconds of the episode is actually content, with the remainder of the episode being the opening and ending sequences. Whereas I had anticipated an episode about the history of the anglerfish dance, I was  treated to the full length of the anglerfish song. The inclusion of various locations in and around Ooarai was a nice touch, although I’m not about to try and find all of the areas.

The fifth Blu-Ray volume for Girls und Panzer is set for release on May 28, 2013, and with it, OVA 5, which is titled Snow War!. Given some of the images we’ve seen so far, it is not unreasonable to suppose that OVA 5 will focus on Erwin and Yukari’s friendship. It has been noted previously that the two share many similarities and interest, so it is hardly any surprise that they would get along so well. However, in the series proper, they only get to interact with one another during the battle against Pravda, when both are sent on a scouting mission.

From the images provided, Snow War! is set somewhere during/between episodes eight or nine. Expectations are presently straightforward: I am looking for greater exploration of the friendship between Yukari and Erwin. While we are on the topic of Blu-Ray 5, Yukari’s Tank Corner 5 will be featured here, as well, and as I did not say so last time, Yukari’s Tank Corner 4 is going to  be bundled with Blu-Ray 4.

The fourth BD volume will include OVA 4: titled “Angler War”, its focus will be on the ever-dreaded Anglerfish Dance, which was featured exactly twice in the series thus far: once in episode four, after Ooarai loses to St. Gloriana in an elimination practise match, and once in episode nine, as Miho decides to give her fellow team mates a morale boost. This OVA is expected to release on April 22, right before my finals begin.

I assure all readers that this next OVA probably won’t generate as long a discussion as the previous two, but for the present, I cannot keep any promises, as things may rapidly change. For parties sufficiently brave to actually try and re-enact the Anglerfish dance, below is a chart of all the steps.

Come here, an, an
Don’t run, an, an
Shaking the waves, an, an, an
Let’s meet tomorrow on that beach nearby

The Anglerfish dance was inspired by the trademark fish of Ooarai, a town located in Higashiibaraki District, Ibaraki, Japan. As of 2003, the town has an estimated population of 19,606. Even before Girls und Panzer, Ooarai attracts 3 million visitors a year. Tourist attractions include bathing beaches, yacht and cruiser marina, marine sports, camping site, fishing, aquarium, a famous golf course and the Ooarai Isozaki Jinja (Shrine).