2 Comments Posted by infinitezenith on August 18, 2017

“Hell is yourself and the only redemption is when a person puts himself aside to feel deeply for another person.” —Tennessee Williams

As an elementary student, Shōya Ishida and his classmates relentlessly bullied Shōko Nishimiya, a deaf girl who had transferred into his class. When she transferred out of their school shortly after, his friends made him a scapegoat, leading to his isolation throughout middle school and high school. By this point, Shōya has learned sign language and seeks to make amends, seeking to return her notebook that he’d retained, but when it falls into the river and Shōya jumps in to retrieve it, he is suspended from school following Shōko’s sister, Yuzuru’s posting it online. His heart set on rectifying his past transgressions, Shōya helps Shōko reconnect with Sahara and brings everyone back together for a day at the amusement park, but Miki later reveals Shōya’s past, prompting him to come forwards with how he’d felt about the whole situation. Shōko grows distressed, feeling she is personally responsible for what had happened to Shōya and attempts to commit suicide by jumping off her apartment’s balcony, but Shōya saves her, falling from the balcony and lapsing into a coma. During this time, Shōya and Shōko’s mothers reconcile, and when Shōya reawakens, he finds Shōko, explaining to her that the consequences of his actions during elementary are his responsibility to bear. When their school’s cultural festival begins, Shōya attends with his friends, feeling he’s finally found redemption and solace. At least, this is the simple summary of Koe no Katachi‘s film adaptation of the manga of the same name. Released in September 2016 with a runtime of 130 minutes, this film’s home release came out ahead of Makoto Shinkai’s Your Name back during May, and having watched it, this is a movie with an exceptionally strong story, following the ins and outs surrounding Shōya’s path to absolution from his transgressions.

Being at the heart of Koe no Katachi, Shōya’s redemption is the single theme in the movie: Koe no Katachi is meant to illustrate that past mistakes are not so easily forgiven or forgotten, but through Shōya, also demonstrate that individuals are not static entities. Clearly remorseful of his cruelty to Shōko, Shōya persists in setting things right even as circumstances continue to transpire against him, setting him back. This stands in stark contrast with his persistence in bullying Shōko during his childhood; as a child, Shōya is evidently a highly unpleasant individual, but his own suffering drives him in a different direction, bringing about a profound change. These changes are presented through his actions, rather than his appearance, and his determination to right wrongs with Shōko is particularly encouraging to watch, showing how even the most hideous of actions can be forgiven with sufficient persistence towards what is right. By the film’s end, he manages to overcome a long-standing challenge in addressing other people, and the changes in his character are noted by some of his peers, who can once again count him as a friend. Shōya’s change is further accentuated by his juxtaposition with Naoka Ueno; in their childhood, they bullied Shōko together primarily because Naoka held feelings for Shōya, longing to earn his attention. While Shōya’s definitely seen the error of his ways and have changed, enduring and doing his utmost to make amends even as his classmates and adults attempt to tear him down, Naoka continues to resent Shōko, going to the lengths of insulting her, refusing to understand her situation and even beating her down physically following Shōya’s hospitalisation. If Shōya is meant to epitomise understanding and change, then Naoka represents a stubborn refusal to improve: she’s intended to evoke hostility in audiences to further emphasise just how far Shōya has come. The sum of his actions in the present and understanding of his actions as a child culminate to form an individual who’s plainly a better person, allowing Koe no Katachi to craft a direct and brilliant tale of redemption.

Following Koe no Katachi‘s release, Makoto Shinkai himself remarked that this film is “fantastic piece of work” and a “polished and grand production” that possessed finess surpassing his own films. While perhaps speaking to Shinkai’s humility and ever-present drive to improve, his remarks also mirror the element that allows Koe no Katachi to be such an effective film: Koe no Katachi is polished precisely because it focused on a single element in Shōya’s redemption. This allows the film to explore in an in-depth fashion the intricate emotions that arise when an individual sets out on such a journey. All of the characters in Koe no Katachi feel authentic, reacting to situations with the same fluidity and naturalness as humans to create a world whose characters come to life. From the tears that are shed to smiles shared, emotions in Koe no Katachi are finely crafted to showcase the spectrum of feelings that Shōya, Shōko, their parents and their classmates come about as a consequence of Shōya’s choices. Shinkai, when speaking of this polish, is referring to this strength of execution in Koe no Katachi: the movie’s greatest strength is being able to follow Shōya in such detail and granularity to really present emotions as we know them. Consequently, if Your Name‘s strength was the scale of the narrative, then Koe no Katachi is equally as impressive for being able to bring so many elements from its story to life owing to its concentration on a single, yet powerful idea. 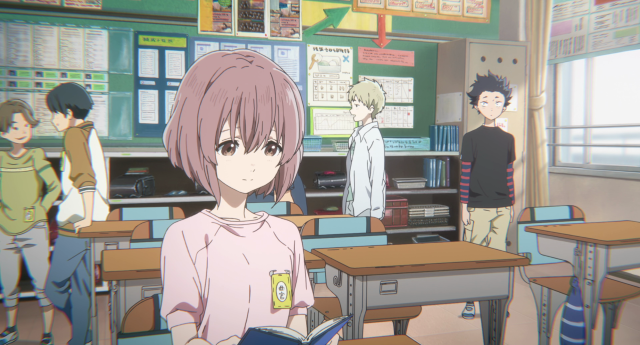 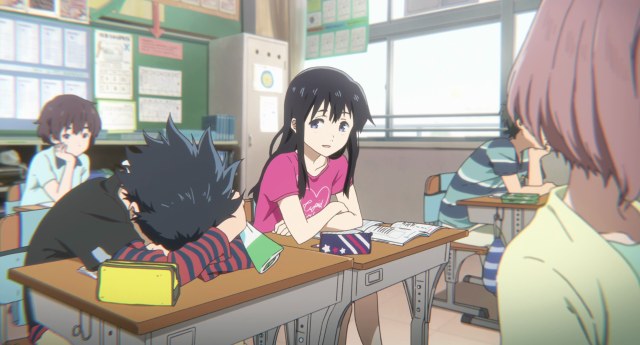 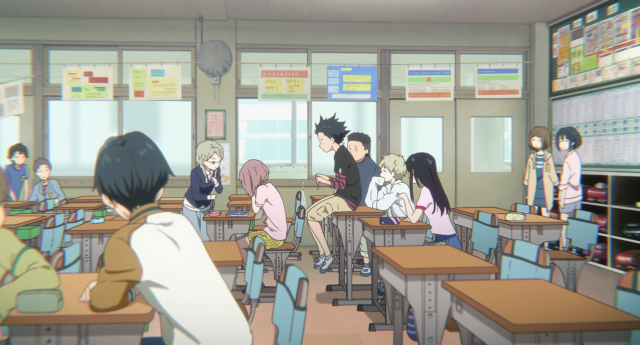 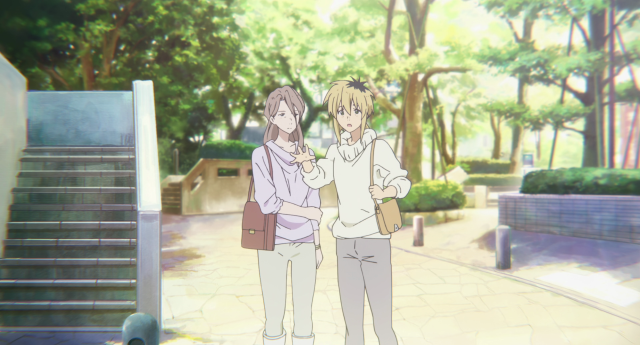 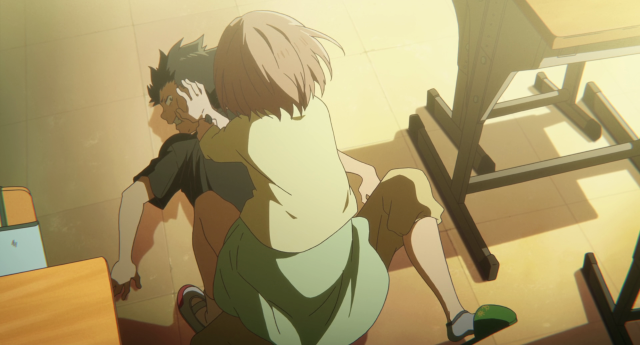 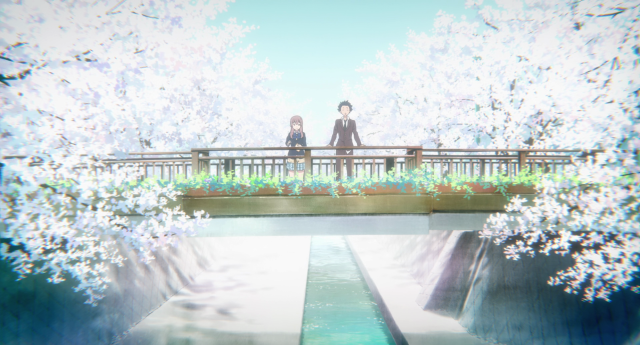 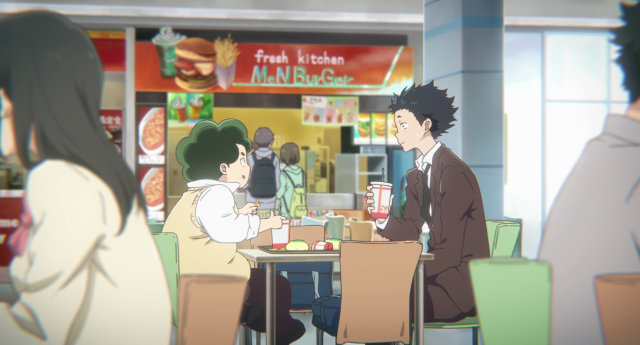 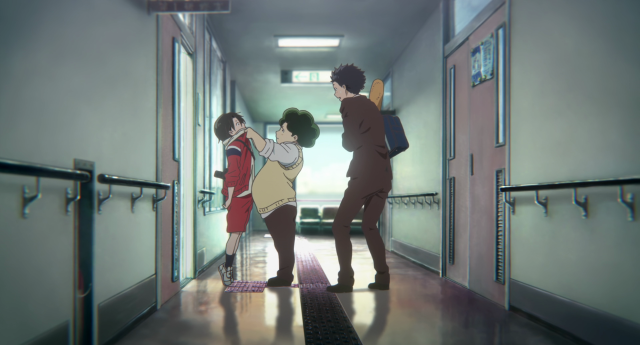 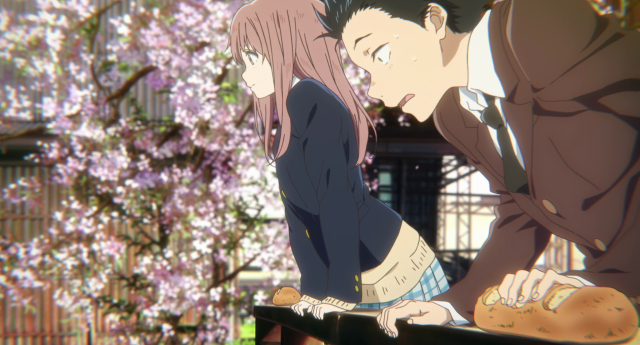 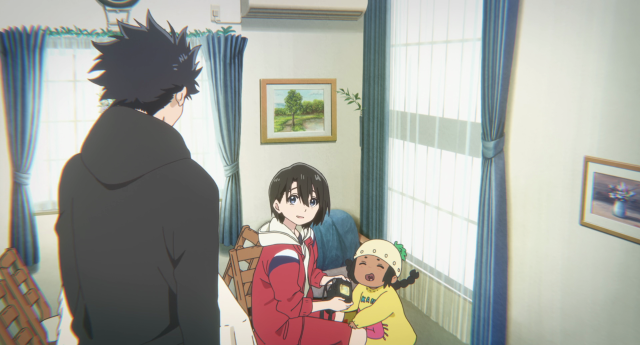 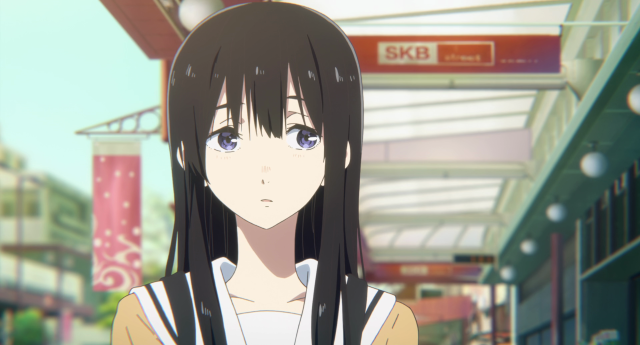 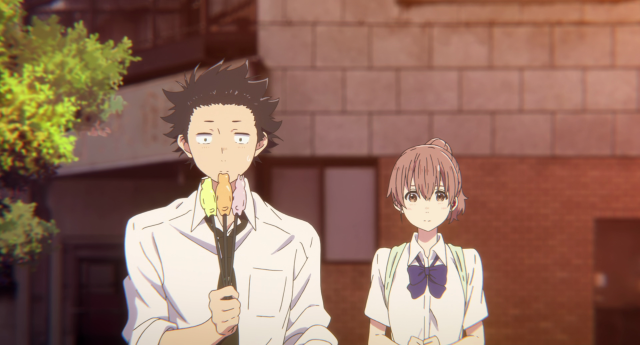 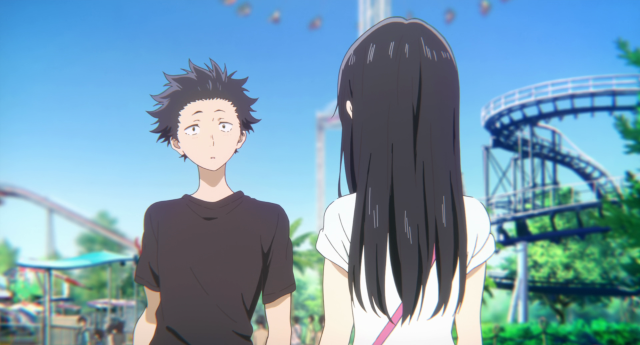 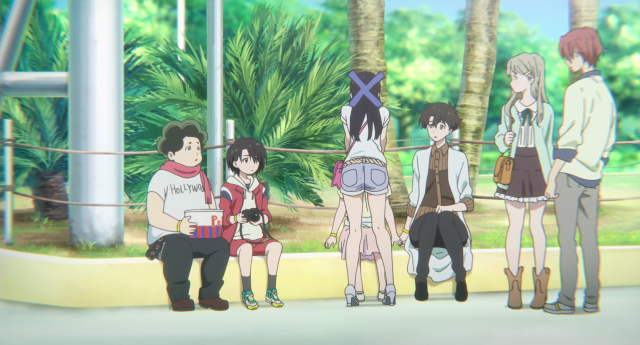 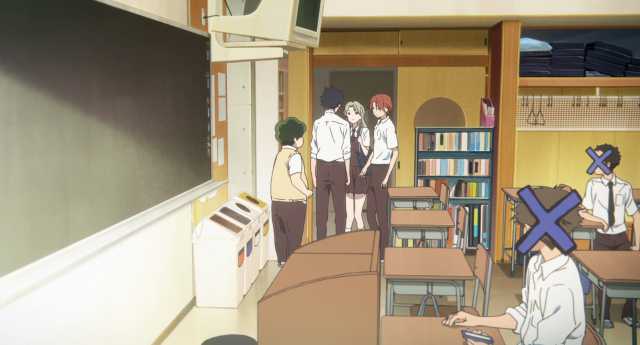 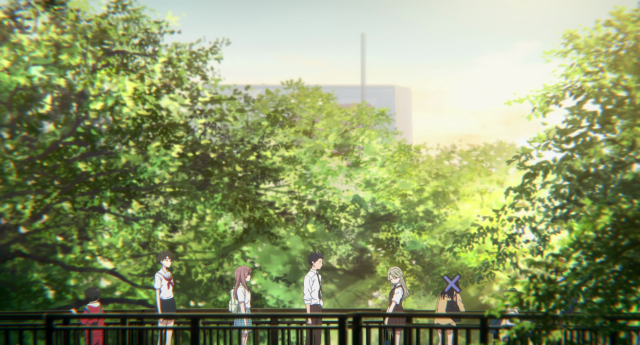 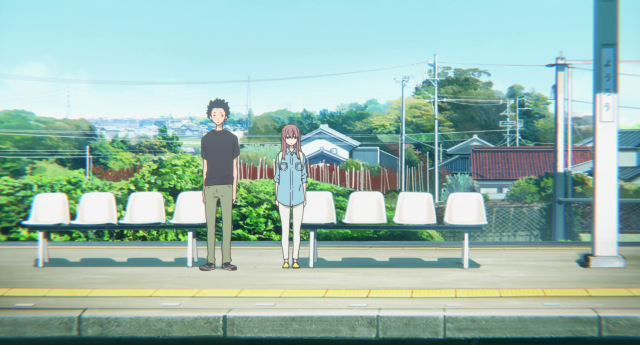 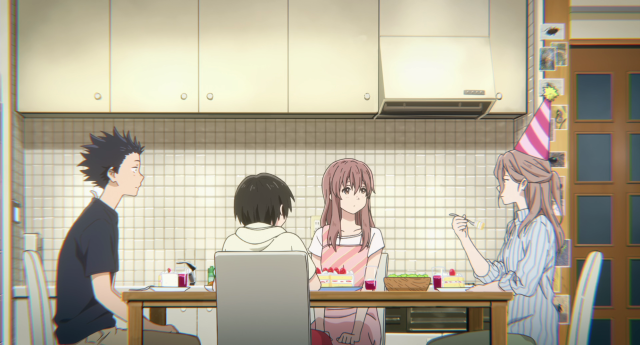 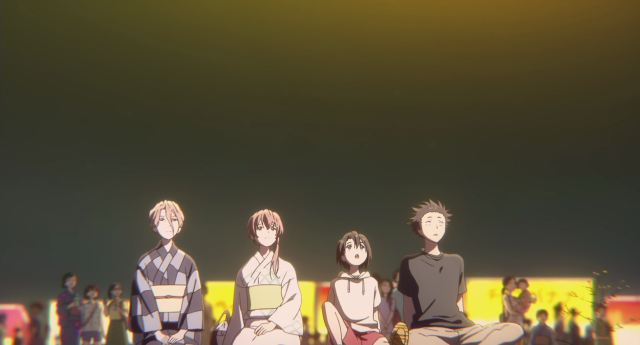 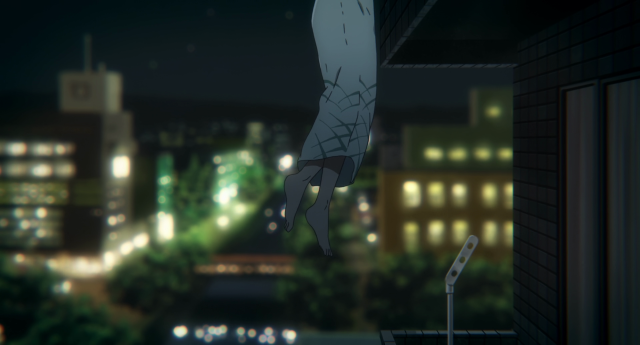 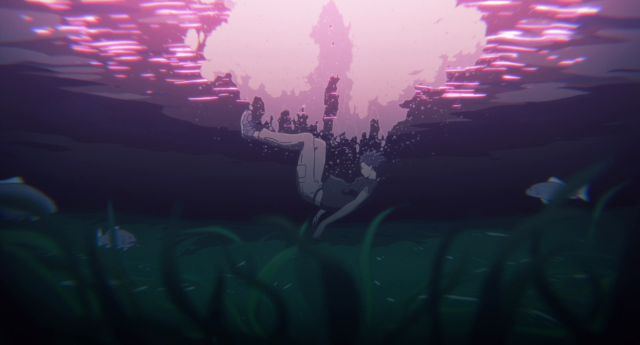 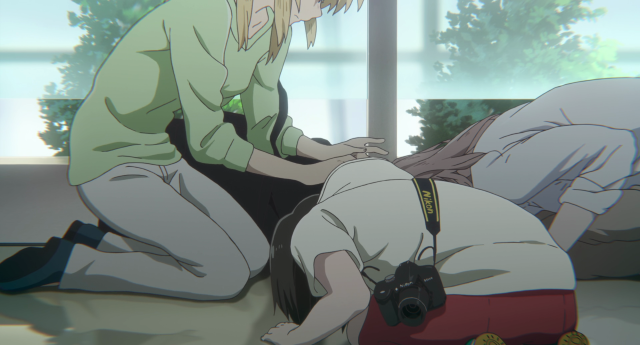 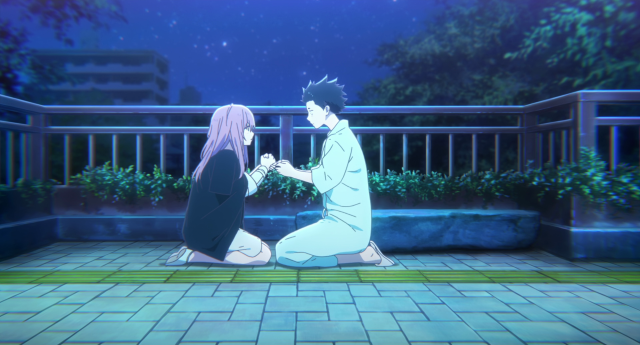 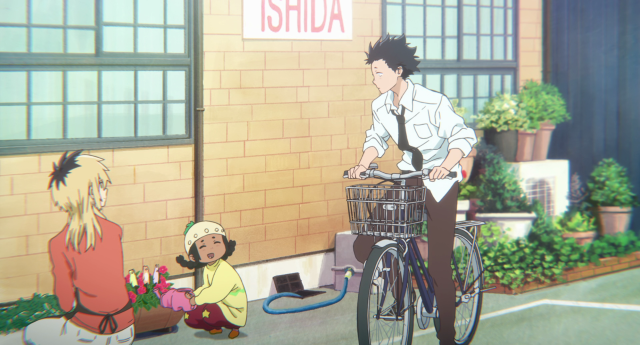 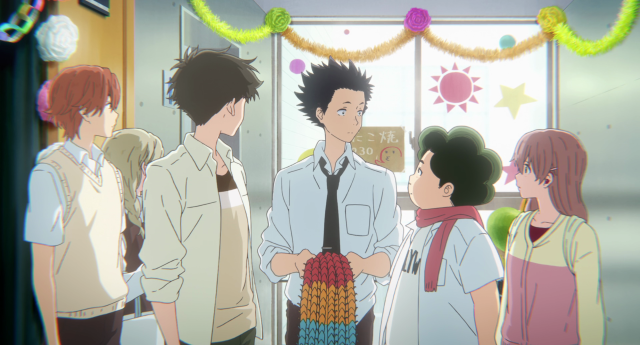 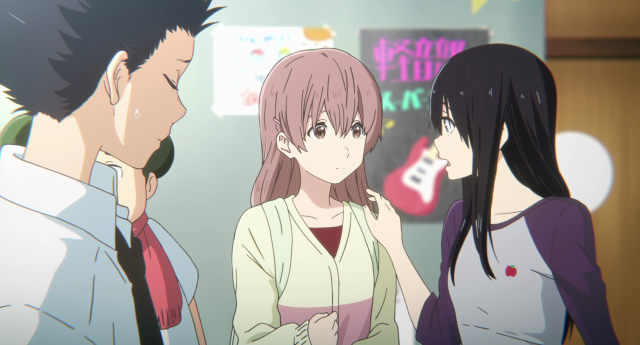 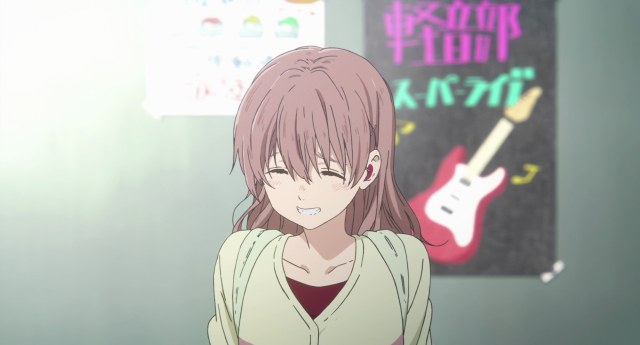 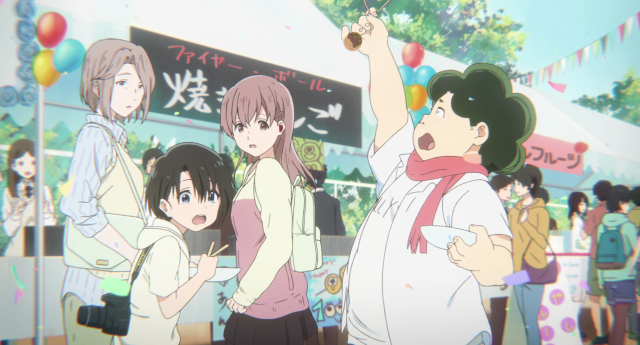 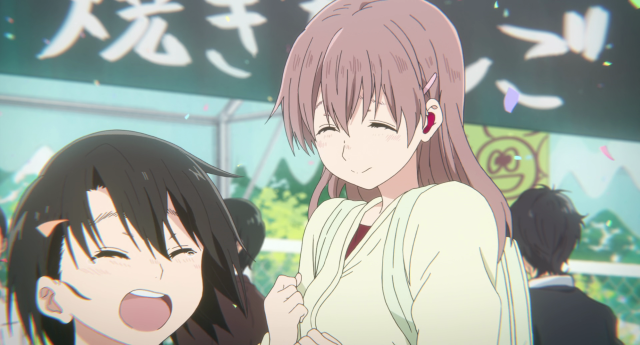 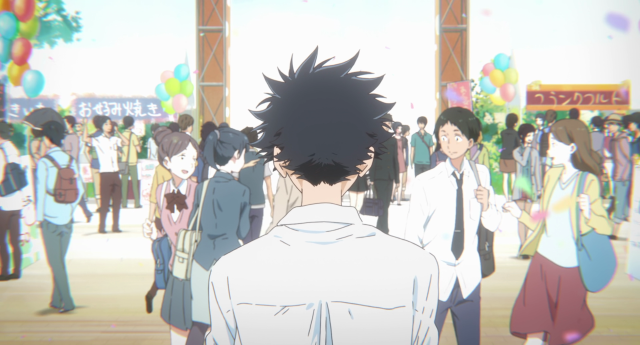 Koe no Katachi is something that merits a strong recommendation for anime fans and folks unfamiliar with anime alike. The powerful story, in covering a full spectrum of emotions, is well worthwhile simply because it shows that people can and will change, and that this effort is met with reward. In conjunction with Kyoto Animation’s typical mastery of visual and aural elements, the film is a remarkable experience for the senses. Granted, as an adaptation of the manga, liberties were taken with the narrative (the film omits Shōya’s attempts to make a film, and also the aftermath of Shōya’s redemption, when he becomes more sociable and counts Shōko as a dear friend), but Koe no Katachi nonetheless manages to smoothly craft a succinct film from the manga. With director Naoko Yamada at the film’s helm, Koe no Katachi showcases the sort of mastery that can be borne out of a film whose narrative is concise but well-executed: movies need not always feature dramatic moments, complex narratives and obscure symbols to provoke discussion amongst viewers. Even the simplest of things in life, the seemingly unassuming journey of a high school student, can be immensely intricate and merit exploration; at this, Koe no Katachi simply excels, weaving superior artwork, sound and narrative together into an entity that keeps its audiences engaged for the film’s entire duration.